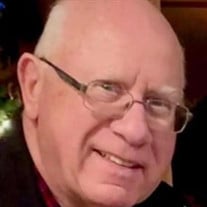 Robert H. “Bob” Davidson was a man of character, honor and hard work, often being a role-model to his sons and daughter. At the age of 78, Bob passed away suddenly from natural causes at home on Wednesday, February 16, 2022. A Celebration of Life service will be held 11:00 am Thursday, February 24, 2022, at the Savanna First United Methodist Church. Visitation will be held prior to the service from 9:00 – 11:00 am at the Church. A luncheon gathering will be held immediately following. For those not in attendance, memorials may be sent to PO Box 309, Savanna, Illinois 61074. Bob's service may be viewed live by visiting https://www.facebook.com/groups/679512620129559 Bob was born August 3, 1943 and grew up in Cornwall-on-Hudson, New York. He is a 1962 graduate of Cornwall Central High School. It was in high school that he started to follow his dream of flying by building model airplanes, and shortly after graduation received his pilot’s license. He also joined the US Navy where he served aboard the USS Franklin D Roosevelt aircraft carrier until 1964. Bob then enrolled in Northrup School of Technology, Inglewood, California where he received an Associates in Aircraft Mechanics, and in 1971 a Bachelors in Aeronautical Engineering. During these years, Bob met the love of his life, Judy Murray. They were married January 11, 1969. They raised a family as they moved around the country to follow Bob’s work, enjoying every adventure. From 1971 – 1975, Bob worked for Grumman Aerospace as a field service representative on the F-14 Tomcat. He then went to work for the Department of Defense, first on various testing programs for the Navy at Patuxent River Naval Air Test Center until 1989. He then transferred to work on explosive safety programs for the Army at the Savanna Army Depot and the Rock Island Arsenal until his retirement. In retirement, Bob served from 2005 to 2015 as a Safety Officer for FEMA. Bob and Judy are members of the First United Methodist Church of Savanna. He loved working outdoors as a hobby farmer. He was talented at chainsaw carving and always working on new inventions. He enjoyed passing down the things he knew to his kids and grandchildren. Bob will be dearly missed by his wife, Judy; two sons, Jonathan Davidson of Freeport, and Jeffrey (Kristine) Davidson of Boonsboro, Maryland; his daughter, Mary Schoenecker of Chicago; five grandchildren, Devin, Erika, Jakob, Rebeka and Nathan; and his sister, Donna (Donald) Spooner of Bucksport, Maine. He is preceded in death by both parents.

Robert H. &#8220;Bob&#8221; Davidson was a man of character, honor and hard work, often being a role-model to his sons and daughter. At the age of 78, Bob passed away suddenly from natural causes at home on Wednesday, February 16, 2022. A... View Obituary & Service Information

The family of Robert H Davidson created this Life Tributes page to make it easy to share your memories.

Robert H. “Bob” Davidson was a man of character, honor and hard...

Send flowers to the Davidson family.