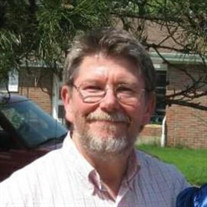 Richard O. Willis, age 68, of Clinton, IA, formerly of Savanna, IL, passed away Thursday, October 8, 2020 at Davenport Select Specialty Hospital. A funeral service will be held at Law-Jones Funeral Home, Preston, IA, on Wednesday, October 21, 2020, at 12pm. Visitation will take place from 10am to 12pm prior to the service at the funeral home. Burial will follow at Salem's Lutheran Cemetery, in Spragueville, IA. Rick was born November 9, 1951, in Peoria, IL, the son of Donald and Vernice (Lane) Willis. Growing up in Savanna, Rick was a proud Eagle Scout, and from a young age had a curious mind and an affinity for academics. He was always eager to learn new things, especially when it came to science and history; a habit he kept throughout his life. He graduated from Savanna High School as valedictorian of the class of 1970. Rick then went on to earn his PhD in animal nutrition from the University of Illinois. While at U of I, Rick ran the campus animal farm. In 2015, after being together since 2008, Rick married Becky Felderman. Rick worked as a biochemist, and taught for a time at his alma mater. He owned and operated a feed business and spent time working for Crow’s Hybrid and Agri-King. In his free time, Rick enjoyed fishing, antique collecting, watching westerns, being around animals, and watch and clock making and repair. He especially enjoyed tinkering with old clocks and pocket watches, and was a member of the National Association of Watch and Clock Collectors, Inc. He also loved to go to restaurants, and out dancing, with Becky. They enjoyed their “spontaneous adventures,” as they fondly called them. Both he and Becky were active in their church, and adored their church family. Rick is survived by his wife, Becky; two sons; one daughter; numerous grandchildren; a sister, Jorene (Joe) Lieb; sister-in-law, Diane Willis and Brenda (Pete) Eickert; brother-in-law, Dale (Mandy Constantino) Felderman; mother-in-law, Shirley Felderman; as well as many nieces and nephews. Rick is preceded in death by his parents, Donald and Vernice; brother, Greg Willis; father-in-law, Allan Felderman; and Becky’s deceased infant.

The family of Richard O. Willis created this Life Tributes page to make it easy to share your memories.

Send flowers to the Willis family.