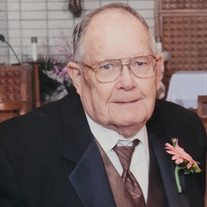 Livestream for Doc's service will be viewable through facebook live via this link: https://www.facebook.com/groups/2019580861535061 Richard “Doc” Rossmann, age 91, of Preston, Iowa, passed away Friday, February 25th, 2022 at Jackson County Regional Health Center following a brief illness. A funeral service will be held at 10:00 a.m., Wednesday, March 2, 2022 at St. Joseph’s Catholic Church, Preston. Visitation will be held from 4:00 to 8:00 p.m., Tuesday, March 1, 2022 at the church. Burial will be in the Preston Cemetery. Doc was born January 29, 1931, in Moline, Illinois, the son of Roy and Phyllis (Embree) Rossmann. On August 21, 1954, Richard married Darlene Grove. They celebrated 41 years of marriage until Darlene’s passing in 1995. He was a member of the United Methodist Church. Doc worked many years as a shop teacher, starting at Interstate 35 School. He then worked at Dunkerton Community High School, Sulfur Springs, Urbana and in the early 60’s moved to Preston where he built his home and both he and Darlene taught for Preston Schools until their retirement. He also was a Driver’s Education instructor for over 60 years. He enjoyed traveling and achieved his goal of visiting all 50 states. With his love for woodworking, Darlene and Doc owned and opened the Treasure Trove as well as spent many years doing craft shows to share their talents. Volunteering was Doc’s middle name. If there was a need, he was there. He served 55 years with the Preston Fire Department, and over 40 years as a member of the Community Ambulance Service. He also was proud to be a member of the Preston Lions Club, Bellevue Masonic Lodge #51, Sternwheelers, Eastern Star, Kaaba Shriners, Jackson County Relay for Life committee, as well as serving on many boards and organizations in Preston and the surrounding communities. He also enjoyed fishing, puzzles, morning breakfast with the guys and attending all his grandkids and great grandkids events, they truly were the light of his life. Doc will be dearly missed by his two daughters, Elizabeth (David) Christoffer of Lansing, Iowa and Marie Rossmann (Gene Kieffer) of Preston, Iowa; 5 grandchildren and 11 great grandchildren, sister-in-law Carol Rossmann of Waukee, Iowa and sister in-law Aline Sturch of Waterloo, Iowa. Richard is preceded in death by his parents, Roy and Phyllis, wife Darlene, his son Steve Rossmann, sister Joyce and brother-in-law Gilbert Parizek, brothers Duane and Jerry, sister Betty, brother-in-law Ron Sturch and an infant grandson Michael.

The family of Richard Doc Rossmann created this Life Tributes page to make it easy to share your memories.

Livestream for Doc&#39;s service will be viewable through facebook...

Send flowers to the Rossmann family.