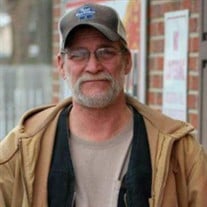 Richard “Rich” Byram, age 64, of Thomson passed away Tuesday, November 23, 2021 after a courageous battle with cancer, at the University of Iowa Hospital, Iowa City. A funeral service will be held 10:30 a.m. Tuesday, November 30, 2021 at Law Jones Funeral Home, Savanna. Visitation will be held 5 – 8 p.m. Monday, November 29, 2021 at the Law Jones Funeral Home, Savanna. The best part of Rich’s life were family and fishing. He enjoyed teaching his son, R.J. everything he knew about the outdoors, woodworking and life. He loved when the grandkids, Aubree and Owen, camped-out overnight and they made waffles with Pops in the morning. Rich was born September 19, 1957 in Joliet, Illinois. His mom and dad, Betty (Thulen) and James L. Moore, raised him well and enjoyed watching him play football at the Savanna High School. He graduated with the Class of 1975, while working downtown at the ole Zephyr gas station. He then served in the US Army as a diesel mechanic and heavy equipment operator from 1975 -78. When he returned to Savanna, Rich began working for Eaton Corp. in Savanna then later in Hanover. It was at Eaton, thirty-five years ago, that Rich met Brenda Badtke. Didn’t take long, and he knew he had found a real friend and love in Brenda. They were married October 17, 1987 in Thomson. Soon after they had R.J. and it was game on with family life. These were great years for Rich, and they even got better with grandchildren. Rich loved working in his shop woodworking, fishing on the river in his boat, PBR, watching sports, NASCAR, ice cream, his trip to Alaska with Brenda, and his three dogs, Shadow, Cola and Yotee. Rich will be dearly missed by his wife, Brenda Byram of Thomson; his son, R.J. (Mandi) Byram of Thomson; two grandchildren, Aubree and Owen Byram; two sisters, Brenda Rose (Nick) Wade of Wilmington, North Carolina and Raylene “Squirt” (Kenneth) Wright of Sterling, Illinois; and several aunts, uncles and cousins. He is preceded in death by all grandparents; both parents; his father-in-law, Melvin Badtke; and several aunts, uncles and cousins.

The family of Richard "Rich" Byram created this Life Tributes page to make it easy to share your memories.

Send flowers to the Byram family.