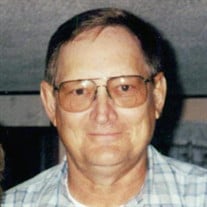 Richard Glenn Peterson, age 75, of Sabula, Iowa passed away Thursday, June 11, 2020 at Finley Hospital, Dubuque, Iowa. A visitation will be held from 12 noon to 2:00 p.m. Thursday, June 18, 2020 at the Law-Jones Funeral Home, Savanna, followed by a family Celebration of Life service. Social distance guidelines will be used. Interment will be in Sterling Cemetery, rural Sabula with Military Rites. Richard was born November 26, 1944 in Savanna, the son of Glenn and Jane (Hodges) Peterson. Like most kids that grow up in Sabula, Richard loved the outdoors and through osmosis, picked up the knowledge to hunt and fish. He is a 1963 Graduate of the Sabula High School. Right after high school, Richard worked at Dupont, then enlisted in the US Navy during the Vietnam War. It was in the service that he cultivated a talent for understanding the ocean & weather, serving as one of the Navy’s Weathermen stationed in Newfoundland, Canada. After the service he continued his career with Dupont, retiring in 1993. Richard found a great friend and wife when he married Donna (Arkenberg) Kinney on June 14, 1975 in Sabula. After retirement they travelled across the continental United States together, with their favorite spots being wherever the kids lived. They also loved taking cruises together and seeing the world. Richard enjoyed watching birds, duck hunting, fishing, watching birds, and talking about the weather. Richard will be dearly missed by his three children, Barry (Joy) Kinney of Spokane, WA, Joe (Debbie) Kinney of Manassas, VA, and Cindy (Rick) Stamp of Marshalltown, Iowa; three grandchildren, Susan (Derek) Kuhnhenn of Minot, North Dakota, Megan (Shane) Johnson of Minot, and Trevor Stamp of Marshalltown; four great grandchildren, Caleb and Brody Kuhnhenn, and Hailey and Olivia Johnson; and three sisters, Sherry (John) Horst of Sabula, Mary Lou (Gordon) Parks of Clinton, and Margo Rockrohr of Clinton. Richard was preceded in death by his wife, Donna; a brother, Larry; a brother-in-law, Don Rockrohr; and both parents.

The family of Richard Glenn Peterson created this Life Tributes page to make it easy to share your memories.

Send flowers to the Peterson family.