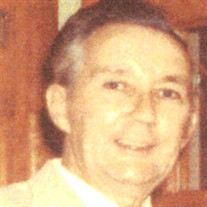 Richard Alan Petersen, age 93, loving Husband, Dad, Grandpa, Great-Grandpa, and Great-Great-Grandpa passed away June 14th, 2020 at home in Sabula. A funeral and celebration of life will be held 10:30 am Saturday, June 20, 2020 at the Sabula Methodist Church. Burial will be in Evergreen Cemetery, Sabula. Social distance guidelines will be followed. Memorials may be made to the Sabula Ambulance or the Sabula Methodist Church. Richard was born September 10, 1926, the fourth son of Ludwig “Lou” and Kathleen (Horan) Petersen. Richard graduated as valedictorian of the class of 1944 from Sabula High School. He served in the US Navy and was honorably discharged in 1946. He married Ellen Ann Moritzen on November 6, 1949 in the Sabula Methodist Church. They raised three children and celebrated almost 71 years of marriage. Richard was a 42-year veteran of the Milwaukee Railroad and retired as a Locomotive Engineer in 1986. In 2003, he published a book titled “Hogger, A Locomotive Engineer Remembers.” At the age of 92, he published his second book, a historical novel titled “Promise,” depicting the perseverance of a Civil War era town. He was an avid reader of books, a lover of dogs, a fan of Big Band music and a Chicago Cub hopeful. Richard will be dearly missed by his beloved wife Ellen; three children, Jeff Petersen of Sabula, Doug (Carol) Petersen of Walton, Nebraska and Claudia (Mike) Abbott of Clinton, Iowa; three grandchildren, Chrissy, Nick and Dustin; four great-grandchildren, Demri, Sydni, Caden and Kyzen, and one great-great grandson, Dawson. Richard is preceded in death by his parents, three brothers, Robert, Donald and James; and a granddaughter, Sarah.

Richard Alan Petersen, age 93, loving Husband, Dad, Grandpa, Great-Grandpa, and Great-Great-Grandpa passed away June 14th, 2020 at home in Sabula. A funeral and celebration of life will be held 10:30 am Saturday, June 20, 2020 at the Sabula... View Obituary & Service Information

The family of Richard Alan Petersen created this Life Tributes page to make it easy to share your memories.

Send flowers to the Petersen family.