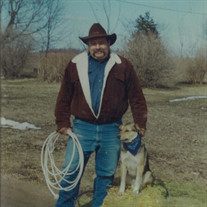 Richard G. Kientopf, age 64, of Preston, IA, passed away at Wednesday, July 22nd, at his farm. A Memorial service for close family and friends will be held Wednesday, July 29th, at 10:00 a.m., at the Kientopf farm. Richard was born April 28th, 1956, son of Wolfgang and Darleen (Megger) Kientopf. He attended Preston schools, and graduated from Preston High School. Richard grew up on the family farm which neighbored his future wife’s families farm. As children Richard and Bonnie would tease each other often. When they grew up the couple reconnected at the county fair, and Richard asked Bonnie out for a date. After a short time dating the two of them knew they wanted to spend the rest of their lives together. Richard proposed to Bonnie on their third date. The couple celebrated 43 years of marriage. Richard was one of the last true cowboy poets. You can read his poetry in different books published in the last few years. Richard was also a talented auctioneer. Family and friends would often suggest that he open his own auction business, but he never did. At the center of Richards life was his family and farm. His was a strict but loving father, and a hard worker. He will be remembered for his caring nature and great sense of humor. Richard will be dearly missed by his wife Bonnie Kientopf of Preston; his sons Richard (Tanya) Kientopf of Blue River, WI, and Robert Kientopf of Milan, IL; four grandchildren and one great-grandchild; four siblings, Carol (Joe Watters) Paulsen of Clinton, Eric (Brenda) Kientopf of Garrettson, SD, Kathy (Christian) Wacker of Preston, and Arthur Kientopf of Clinton. Richard is preceded in death by his parents, Wolfgang and Darleen; brother Walter Kientopf, grandparents Willi and Anna Kientopf, Ben and Marcella Bahnsen, and George Meggers; and in-laws Merial and Robert Krieser.

Richard G. Kientopf, age 64, of Preston, IA, passed away at Wednesday, July 22nd, at his farm. A Memorial service for close family and friends will be held Wednesday, July 29th, at 10:00 a.m., at the Kientopf farm. Richard was born April 28th,... View Obituary & Service Information

The family of Richard G. Kientopf created this Life Tributes page to make it easy to share your memories.

Send flowers to the Kientopf family.