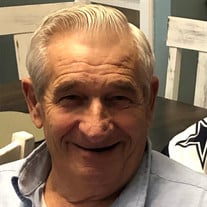 Richard D. Harris, of Milledgeville, passed away peacefully on Thursday, January 13, 2022. Richard was born June 25th, 1939, son of William and Belvadean (Ballard) Harris. He grew up in the area around Erie/Prophetstown and attended Erie High School. Richard met the love of his life, Tena Dhabalt and they married and started a family, residing in Milledgeville. Together they raised five children and celebrated 61 years of marriage until Tena’s passing in 2020. Richard was the definition of a hard worker and was a skilled carpenter. He loved to make things for his family, including toyboxes and dollhouses which will be cherished for a lifetime. He enjoyed the outdoors, especially hunting and fishing. Richard was an avid Cubs fan for his entire life and enjoyed watching every game. Richard had the gift of striking up a conversation with a stranger, making a friend out of them by the end of it. He was incredibly friendly, personable, and quite funny. Richards family was the most important part of his life, and his kind heart lives on in those he leaves behind. Richard will be dearly missed by his three sons, Branty (Julie) Harris, David (Tuesdai) Harris, and Shane (Brenda) Harris; two daughters, Ramona (Roger) Koett and Willow Russell; nine grandchildren, Luke (Ryann) Koett, Zane (Stacey) Russell, Nikki (Zack) Thomure, Kara (Jamie) Koett, Andrew (Kayla) Russell, Marissa Harris, Levi (Ashley) Harris, Jordan Harris, and Payton Harris; 11 great-grandchildren; two brothers, Bill Harris and Gary Harris; two sisters, Brenda (Jim) Kerley and Sue Buthe. Richard is preceded in death by his wife, Tena Harris; his parents, William and Belvadean; brother, Steve Harris, and son-in-law, John Russell. A celebration of life will be held Saturday, January 22nd at the Milledgeville Men’s Club from 11:30am to 4:30pm. Everyone is encouraged to wear Cubs apparel in memory of Richard. In lieu of flowers, memorials may be made to Rock River Hospice.

Richard D. Harris, of Milledgeville, passed away peacefully on Thursday, January 13, 2022. Richard was born June 25th, 1939, son of William and Belvadean (Ballard) Harris. He grew up in the area around Erie/Prophetstown and attended Erie High... View Obituary & Service Information

The family of Richard D. Harris created this Life Tributes page to make it easy to share your memories.

Richard D. Harris, of Milledgeville, passed away peacefully on...

Send flowers to the Harris family.