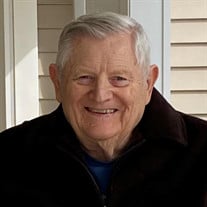 Richard Gulley, age 81, of Lake Carroll, Illinois passed away Thursday, October 14, 2021 at Advocate Condell Medical Center, Libertyville, Illinois. A private family service will be held on Friday, October 22, 2021 at Oak Hill Cemetery, Mt. Carroll, Illinois. To watch the service online, visit Richard's Facebook group at: https://www.facebook.com/groups/375975624265174 In lieu of flowers, a memorial has been established for Anthology’s rooftop garden, a place that Richard loved to spend time visiting with family and gardening. To donate go to https://gofund.me/71009f46 Richard was born June 19, 1940, the son of Robert and Bertha (Newman) Gulley in Twin Falls, Idaho. He was a farm kid that graduated high school in Jerome, Idaho with the Class of 1958. Richard went on to attend the University of Idaho where he was a member of Army ROTC as well as president of the Delta Chi Fraternity. He received his MBA in 1976 from Central Missouri University. Richard served in the Army at Tacoma, Washington. On September 21, 1963, Richard married Sonja Kuykendall. Together they raised three sons, Bob, David and Don, and celebrated 51 years of marriage until Sonja’s passing in 2015. Richard’s 30-year career with Amoco Oil took him all over the country. He worked his way up the ladder, eventually attaining an executive position at the company’s worldwide headquarters in Chicago, Illinois. Richard enjoyed playing golf (known for being very good), fishing, boating and loved spending time with Sonja, his 3 sons and 9 grandchildren driving around on the golf cart and pontoon boat. He was proud to pass down his wisdom while also learning from the younger generation. Richard will be dearly missed by his three sons, Bob (Christine) Gulley of Monument, Colorado, David (Denise) Gulley of Grayslake, Illinois, and Don (Jennifer) Gulley of Vancouver, Washington; nine grandchildren, Abraham, Levi, Beau, Matthew, Alyssa, Andrea, Marissa, Taylor and Brooke; and one brother, Bill (Judy) Gulley of Jerome, Idaho. He is proceeded in death by his wife, Sonja, and his parents, Robert and Bertha.

The family of Richard Gulley created this Life Tributes page to make it easy to share your memories.

Send flowers to the Gulley family.