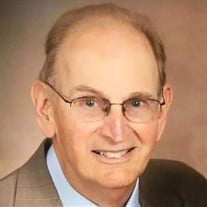 Richard Henry “Dick” Gleich, 84, of Savanna, passed away Sunday, March 21, 2021 at his daughter’s home in Rochester Hills, Michigan, in the care of his family and hospice. He was a loving husband, thoughtful father, a fun-loving grandfather and a servant of the Lord. A funeral service will be held 11:00 a.m. Tuesday, March 30, 2021 at St. Peter Evangelical Lutheran Church, Savanna with Reverend Dan Foelske officiating. Visitation will be held 5:00 – 7:00 p.m. Monday, March 29, 2021 at the Law-Jones Funeral Home, Savanna. You may watch the mass at 11:00 a.m. on Tuesday, March 30 at https://www.facebook.com/groups/743534136361339 . Richard was born December 6, 1936 in Pekin, Illinois, the son of Fred and Bertha (Volk) Gleich. The family moved to Savanna when Richard was just beginning school. He graduated with the Class of 1955 from the Savanna High School where he lettered in basketball. A high school project at Shaner-Handel TV repair shop led to developing a life long passion in electronics technology. He then attended DeVry Technical Institute in Chicago and was certified as an Electronic Technician. Richard knew there were sparks when he met the love of his life, Judy Whitmer. On June 21, 1959, Richard and Judy were married at St. Peter Lutheran Church in Savanna. They recently celebrated sixty-one years of marriage and together they raised three daughters. Raising all daughters was a joy; when the grandchildren and great-grandchildren came, it just added to the blessing. The highlight of every year was the annual camping and canoeing trip down a different river with the grandkids at "grandpa camp". Richard worked forty years as a Communications Specialist with the Milwaukee Railroad, the Soo Line and the CP Railroad, retiring in 1998. His area of responsibility covered the Midwest, where many friendships were made. He was well respected for his professionalism, ingenuity, and knowledge of electronics technology. He was a founding board member for the Blackhawk Area Credit Union in Savanna and served in a leadership role there for many years. Richard and Judy enjoyed their membership in St. Peter Lutheran Church of Savanna. Richard’s love for the Lord was evident in the way he lived every aspect of his life, his caring for his Church and his family. He truly felt that "God blessed him with daughters, who then gave him his sons." Richard was an avid golfer and enjoyed many rounds of golf and camaraderie at the Palisades golf course. He was a master handy man who not only tackled home projects with ease, but also shared his skills with his children. He shared his love of woodworking with his family by building nativity scenes and children's toys. Richard will be dearly missed by his wife, Judy, of Savanna; his three daughters, Wendy (Mark) Robertson of Rochester Hills, Michigan, Shari (Robert) Baker of Granger, Indiana and Cindy (John) Garnsey of Columbia, Maryland; six grandchildren, Lindsay (Nick) Hurst, Alex Robertson, Evan Baker, Austin (Fiance Rachel) Baker, Nicholas Garnsey and Christopher Garnsey; and three great-grandchildren, Lincoln, Nolan and Logan Hurst.

The family of Richard Henry "Dick" Gleich created this Life Tributes page to make it easy to share your memories.

Send flowers to the Gleich family.