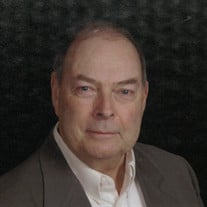 Richard “Dick” Veith, loving husband, father and grandfather, was a lifelong resident of Mt. Carroll, and never tired of learning something new or participating in his beloved community. He was known as a great friend and storyteller. He is appreciated for his service to Carroll County and Stephenson County as the Director of Probation from 1970, and then Trial Court Administrator for the 5 county 15th Judicial Circuit, retiring in 2004. At the age of 79, Dick passed away Tuesday, December 14, 2021 at FHN Memorial Hospital in Freeport. Richard was born March 25, 1942 in Savanna, the son of Thomas and Marjorie (Tink) Veith. He is a 1960 graduate of Mt. Carroll High School, where he became friends with the future love of his life, Nancy Becker. Dick played in the high school band and Nancy sat near him. It didn’t take long for them to realize they were in-tune and began dating in 1959. Dick and Nancy were married February 12, 1964. They have celebrated 57 years of marriage and raised three children, Thomas, Alexander and Teresa. Being a husband, father and grandfather was his favorite part of life. Dick was attending Illinois College in Jacksonville when his mother became ill, and he returned home to help with her care. She passed away in 1963. He had also joined his father Tom in business at Veith Memorials in Mt. Carroll, and also worked at the Mt. Carroll Insurance Agency. He found his true calling when he began to work at the Carroll County Probation Office; he enjoyed helping others through some of life’s toughest events, always with a smile and a big dose of caring. Dick would say, “A man becomes a man when he takes responsibility for what he does.” Dick had a way with words, often bringing people together and making a difference in someone’s life. The family would sometimes hear, “He was my probation officer, and he saved my life.” Dick cared about his work and his community. He enjoyed reading and researching just about anything. He would say things like, “Read it, love it, enjoy it!” or, “Just read the darn manual!” He liked working with computers, clocks, watches, guns, hunting, and photography. He was a member of the First Baptist Church, Mississippi Flyway Gun Club, Rack & Wing Gun Club and Friends of the Waukarusha. He also served on several boards in the community and the fire department. He will be dearly missed by his wife, Nancy; two sons, Thomas (Aimee) Veith of Jacksonville, IL and Alexander (Amy McKee) Veith of Mt. Carroll; his daughter, Teresa (Jim) Lynch of Peoria; seven grandchildren, Charles, Ella and Nathan Veith and Owen, Eliot, Maeve and Eamon Lynch; a sister, Mary Elizabeth (Clark) Baker of Zion, IL; a step-sister, Pamela Miller of Morrison; and two step-brothers, Thomas (Carol) DuBree of Naugatuck, CT and Douglas (Cindy) DuBree of Moline, IL. Dick is preceded in death by both parents; his step-mother, Mary “Lolly” Veith; and his step-sister, Pru Haney. The family will hold a private service (due to Covid concerns) at the First Baptist Church of Mt. Carroll on January 10, 2021. Burial of ashes will take place in Oak Hill Cemetery. A memorial has been established in his honor.

Richard &#8220;Dick&#8221; Veith, loving husband, father and grandfather, was a lifelong resident of Mt. Carroll, and never tired of learning something new or participating in his beloved community. He was known as a great friend and storyteller.... View Obituary & Service Information

The family of Richard "Dick" Veith created this Life Tributes page to make it easy to share your memories.

Send flowers to the Veith family.