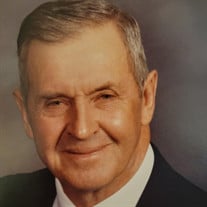 Richard “Dick” Schneider lived his entire life on the same farm in Salem Township, rural Mt. Carroll. At an early age he learned the value of a hard-days work, helping on the family farm and caring for livestock. This became his passion as he was a good steward of cattle and hogs throughout his career as a farmer. At the age 93, Dick passed away Wednesday, November 24, 2021, on his birthday at Allure of Mt. Carroll Nursing Center. Richard was born November 24, 1928 at home, the son of Aaron and Tillie (Sack) Schneider. He attended the Daggett Country School and is a 1946 graduate of the Mt. Carroll High School. When he graduated, horses were still being used to farm. He was happy to buy his first tractor in 1951 an H IH, which still runs today. In the summer of 1950, it was the perfect day for a picnic (fried chicken made by Tillie) when Dick met the love of his life, Evelyn Mielke. On February 18, 1951 they were married at the Savanna Methodist Church. They celebrated over 70 years of marriage. “He was a good man, always kind, patient and giving.” Dick and Evelyn were members of the Mt. Carroll United Methodist Church. He always enjoyed the outdoors, hunting and fishing were his favorite pastimes. He hunted deer, antelope and moose in Montana and Canada. Dick and Evelyn enjoyed playing cards and dancing with their friends and family all throughout life. Once the kids were grown, it was nothing to travel 75 miles to find a good polka band. Dick handed down his work ethic, he didn’t wait until someone else came along, if you were meeting him at 6am to change out an engine, he would have it already to go by 5:30. Just like most farmers, Dick liked to reminisce about the old days. He also handed down his sense of humor, he was good at telling stories and jokes. The grandchildren laughed a lot around Grandpa and enjoyed listening to the way things used to be. Dick will be dearly missed by his wife Evelyn of Mt. Carroll; a son, Steve (Linda) Schneider of Mt. Carroll; a daughter, Sandra (Tim) Clark of Clinton, Iowa; seven grandchildren, Melissa (Brad) Stien, Brent (Kim) Schneider, Brian (Pixie) Schneider, Josh (Fiance Kristen) Schneider, Kristin Clark, Courtney (Jason) Anderson and Michael Clark; and nine great-grandchildren, Brody, Teagan, Macy, Micah, Audrey, Aspen, Karson, Jaxon and Allie. Dick is preceded in death by both parents; two sisters, Florence Smith and Hazel Strauch; and a brother, Arthur at the age of five. A funeral service will be held 12:00 noon on Friday December 3, 2021 at the Law Jones Funeral Home in Mt. Carroll with Pastor Dave Yim officiating. Burial will be in Oak Hill Cemetery, Mt. Carroll. Visitation will be held prior to the service from 10:00 am – 12:00 noon at the funeral home. Following the service, lunch will be provided at the Savanna Moose.

Richard &#8220;Dick&#8221; Schneider lived his entire life on the same farm in Salem Township, rural Mt. Carroll. At an early age he learned the value of a hard-days work, helping on the family farm and caring for livestock. This became his... View Obituary & Service Information

The family of Richard "Dick" Schneider created this Life Tributes page to make it easy to share your memories.