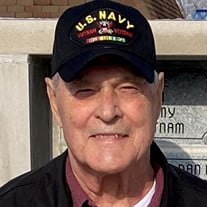 The perfect day for Dick Bailey was being outdoors, searching for morels, hunting, fishing or just spending time on the river. Richard A. Bailey, born October 3, 1940 in Hanover, Illinois, passed away at home surrounded by family at the age of 81 on Saturday, February 12, 2022, after a long battle with cancer. Parents were Leslie L. Bailey and Genevieve V. (Garrow) Bailey of Savanna. He married Ramona G. (Gallagher) Bailey on February 14, 1992 and passed just before celebrating 30 years of marriage. Richard (Dick) graduated from Savanna High School with the class of 1958. After serving 2 years in the Navy, aboard the aircraft carrier USS Midway, with 6 months in the Tonkin Gulf during the Vietnam conflict, he returned to complete his college degree at Western Illinois University graduating with a business education degree in 1969. After 1 year of teaching at Algoma High School in Algoma, Wisconsin, he taught business classes and coached football and wrestling at Lanark High School for 7 years. After a short break from teaching and 3 years as a general contractor, he began working at Metform Corporation in Savanna, retiring in 2003 as Sales Manager after 23 years of service. In his retirement years he enjoyed fishing, hunting and woodworking. He was a member of St. John’s Lutheran Church in Clinton, Iowa and served as an elder for a number of years. He loved helping friends with building and repair projects. He even managed to do a few projects for his loving wife Ramona (Monie). Even more, he loved spending time with his 3 children, their spouses and 9 grandchildren. Richard was preceded in death by his parents Leslie L. and Genevieve V. (Garrow) Bailey; a brother Wesley C. Bailey; half-brother Charles (Chuck) Bailey; his father & mother-in-law George G. and Anna M. Gallagher and several aunts and uncles. He is survived by his wife Ramona (Monie); 3 daughters, Jamie (Corey) Engel of Freeport, IL, Sara Richmond of Elizabeth, IL and Breanna (John) Rath of Bettendorf, IA; 9 grandchildren, Peyton Engel, Kally Richmond, Abby Richmond, Preston Engel, Gage Rath, Ben Richmond, Amie Richmond, Brynner Rath and Reeve Rath; a sister Patsy M. Raab of Clinton, IA; 2 half-brothers Jack (Maria) Bailey of Virginia Beach, VA and Robert Bailey of Savanna, IL. and several nieces and nephews. A funeral service will be held 10:00am Saturday, February 19, 2022 at St. John Lutheran Church, 416 Main Avenue, Clinton, Iowa. Inurnment will be at Savanna Township Cemetery with Military Honors following the funeral. A Celebration of Life will be held from 12:30pm – 3:30pm at Manny’s in Savanna, with a Time of Sharing at 1:00pm on Saturday, February 19, 2022. Friends and Family who can't attend and wish to watch the livestream can watch at this link, https://www.facebook.com/groups/489689496048492/

The perfect day for Dick Bailey was being outdoors, searching for morels, hunting, fishing or just spending time on the river. Richard A. Bailey, born October 3, 1940 in Hanover, Illinois, passed away at home surrounded by family at the age... View Obituary & Service Information

The family of Richard (Dick) Bailey created this Life Tributes page to make it easy to share your memories.

The perfect day for Dick Bailey was being outdoors, searching...

Send flowers to the Bailey family.