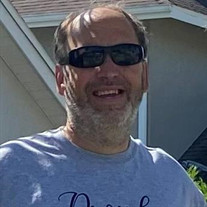 Raymond Wolter, age 55, of Hanover, IL, passed away Wednesday, December 8th, at FHN Hospital in Freeport, IL. Funeral service will be held Saturday, December 18th, at St John the Evangelist Catholic Church in Hanover at 11:00 a.m.. Visitation will be from 4:00 p.m. to 8:00 p.m. Friday, December 17th, and from 10:00 a.m. to 10:50 a.m. Saturday, December 18th at the Law Jones Funeral Home in Hanover. A memorial fund has been established. Those unable to attend services in person may join the livestream at https://www.facebook.com/groups/272638034844313 Raymond was born on August 12th, 1966, the youngest of three boys, to parents William and Irene (Mussman) Wolter. He grew up in Hanover and attended Hanover High School. Raymond was the last graduate of Hanover High School, receiving the schools last diploma in 1985. After high school Raymond ran Raymond's Grocery Store and Raymond's Pizza Parlor in Hanover, before moving to Florida where he began working for Disney World. It was around this time that Raymond would strike up a relationship with the love of his life, Kristy Schoenhaar. From Florida Raymond wrote Kristy many letter's. On a trip back to Hanover Raymond took Kristy on a date, and the rest is history. Raymond proposed to Kristy on a Disney cruise in 1999. The couple would marry the following year. Together, Raymond and Kristy raised one son and celebrated 21 years of marriage. Raymond had the ability to light up a room. He loved to chat with just about anyone, and always had a witty remark or a wise crack. He was an active member of his community. Raymond was a member of the Knights of Columbus, Friends of Wappello, JDCF, and the Jo Daviess County Radio Patrol. Maybe most notably though, Raymond was Leo the Duck at Mallard Fest for many many years. Raymond was an avid Cubs and Hawkeyes fan, and attended many games. At the center of Raymond's life was his family and his faith. Raymond loved being a father and spent many hours Bee Keeping with his son Riley. Raymond and Riley were big skiers, and bonded over the slopes at Chestnut Mountain. Raymond was an active part of his church, and a life long member of St John the Evangelist Catholic Church in Hanover. Raymond will be dearly missed by his loving wife Kristy Wolter of Hanover; his son, Riley Wolter of Hanover; his mother, Irene Wolter of Hanover; two brothers, Frank (Denise) Wolter of Hanover, and Robert (Jodi) Wolter of Orlando; a brother-in-law, Jeff (Shellie) Schoenhaar of Hanover and a sister-in-law, Karen Andersen of Hanover; his parent-in-laws, Carl and Marianne Schoenhaar of Hanover; seven nieces and nephews, Chris (Isabelle) Wolter, Bruce (Beth) Wolter, Kim (Jason) Wolter, Ashley (DJ) Wearmouth, Alexis (Austin) Andersen, Jarrett Schoenhaar, and Keagan Schoenhaar; several Aunts, Uncles, and Cousins; and many close family friends. Raymond is proceeded in death by his father, William, Aunt Patricia, Uncle Leo, Aunt Janis, and his sister-in-law, Sara.

The family of Raymond Wolter created this Life Tributes page to make it easy to share your memories.

Send flowers to the Wolter family.