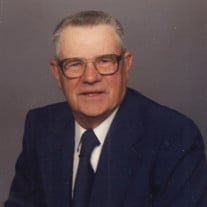 Raymond Paul Trenkamp, age 96, of Maquoketa, IA, passed away Saturday, June 27, 2020 at Maquoketa Care Center. A funeral mass will be held Thursday, July 2, 2020 at St. Joseph Catholic Church, in Preston, IA at 11 am. Visitation will take place at Law Jones Funeral Home in Preston, from 5-7pm Wednesday, July 1, 2020, and again on July 2, one hour prior to mass at the church. Ray was born October 10, 1923, in Sugar Creek, IA, the son of Henry and Christina (Banowetz) Trenkamp. One of 19 children, Ray attended Sugar Creek Country School. A lifetime farmer, Ray helped at the family homestead before entering into service with the United States Army at the tail end of WWII. Ray didn’t speak of his military service often, but his family remains proud of it to this day. Following his honorable discharge from the Army, Ray began his working career as an electrician with Bob Asmussen. He married Velma Thines on February 10, 1949 at St. Joseph Catholic Church. It wasn't long before Ray returned to farming, renting farm ground for a while, then ultimately buying the Banowetz Farm. Ray was a proud member of the American Legion and St. Joseph Catholic Church, but if there's one thing he was known for, it's his penchant for jokes and pranks. Growing up in a house with 19 kids, it's easy to see where his mischievous side developed. On one afternoon, his mother left the house, instructing Ray and his siblings to behave, and above all else, "don't pick the lone apple from the apple tree!" Their mother returned home to find that the apple had been eaten. Upon closer inspection, the apple had indeed been eaten to its core, but it still hung, attached to the tree, at the stem. You see, Ray and his siblings followed their mother's instructions. They didn't "pick" the apple. Ray kept the pranks going into old age. After supper, he'd always take a "snooze" in his chair. And if you paid close enough attention you often see a grin appear on his face as he sat there, eyes closed. This meant that he was planning something, and you could expect a good laugh before too long. It was this light heart and playful spirit that made him so beloved by so many. His friends and siblings held a dear place in his heart. Upon retirement he'd go into town every morning and afternoon for coffee, with his friends and brothers. They'd solve the world's problems and of course, predict the future. The predictions weren't magic, examining caterpillars to determine the upcoming winter was a science, and you couldn't tell them any different. Ray will be dearly missed by his family, whom he loved with every ounce of his being. He is survived by his 6 children Laurence “Larry” Trenkamp of Preston, Lonnie (Lola) Trenkamp of Preston, LaVerne (Jann) Trenkamp of Preston, Beverly (Allen) Hansen of Ainsworth, Nebraska, Constance “Connie” (Dean) Chrest of Preston, and Mary Lou (Larry) Johnson of Maquoketa, Iowa; 20 grandchildren; 30 great-grandchildren; a brother, Leo Trenkamp of Preston; a sister, Margaret Roling of Preston; sister-in-law, Lillian Trenkamp of Preston; and many extended family members. Ray is preceded in death by his wife, Velma, his parents and 16 of his siblings.

The family of Raymond Paul Trenkamp created this Life Tributes page to make it easy to share your memories.

Send flowers to the Trenkamp family.