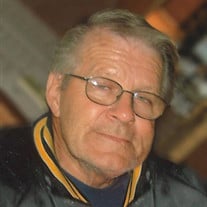 Raymond Carlos Skiles, age 82, of Savanna, Illinois passed away Monday, April 26, 2021 at Clinton MercyOne Hospital. A funeral mass will be held Tuesday, May 25, 2021 at St. John the Baptist Catholic Church, in Savanna, IL, at 10:30 am. Visitation will take place from 5pm to 7pm on Monday, May 24, 2021, and from 9:15am to 10:15am the morning of the mass, both at Law Jones Funeral Home, in Savanna, IL. Burial will be at St. John's Catholic Cemetery, in Savanna, IL. You may view Ray's service live by visiting his Facebook group at: https://www.facebook.com/groups/862276821365289 Ray was born January 4, 1939 in Savanna, Illinois the son of Clyde N. and Luella (Libberton) Skiles. He grew up north of Savanna in the Millhollow. He attended the Mosquito Hill one room schoolhouse and Savanna High School. At age 17 he enlisted in the United States Navy. He was stationed in Rhode Island and served on the U.S.S. Waccamaw (AO-109) as a boatswain’s mate 3rd class from 1956 to 1961 and travelled around the world. One weekend, his shipmate invited him to go home with him to New York. During that shore leave he was introduced to his shipmate’s sister, Joanne C. Loomis. It was love at first sight and the rest is history. The two were engaged shortly thereafter and married on April 8, 1961. Ray and Joanne settled in Queens, NY after marriage and later moved to Long Island. Together they celebrated 60 years of marriage. Ray always had a knack for fixing engines, and he began his career as a mechanic in a local repair shop after the Navy. Over the years Ray moved up to larger diesel engines and worked for several cement companies keeping their fleets running. In 1977, Ray moved his family back to his hometown of Savanna, Illinois where he continued to work as a diesel mechanic in Morrison and later in Mt Carroll at Northern Illinois Diesel alongside his son, Ray, where he gained the nickname “Pops”. After he retired, he spent his time repairing tractors, and other small engines around the area and mowing grass. Ray enjoyed telling stories of his younger days in the Navy and stock car racing with friends. He enjoyed watching boxing, the Chicago Bears, NACAR racing and his favorite movie Christmas Vacation and fishing. He had a great sense of humor and could be found very early most mornings before work down at the local restaurant telling stories over a cup of coffee with friends. His greatest joy, however, was spending time with his family. Ray was a devoted husband, father, grandfather, brother, uncle, and friend. He will be dearly missed by his wife, Joanne, his daughter Catherine (James) Chavez of Tempe, Arizona, and son Raymond (Julie) Skiles of Savanna; seven grandchildren, Katie Hamilton, Elizabeth Brunner, Shelby and Abbey Skiles of Illinois, and Carlos, Kendra and Jimi Chavez of Arizona; and five great-grandchildren in Arizona. He is also survived by his brother Frank (Sharon) Skiles, of Louisiana; and brother-in-law Chip (Terry) Loomis, of North Carolina and numerous nieces and nephews and extended family. Ray is preceded in death by his parents, his sisters Florence Brandt and Evelyn Rannow; brothers-in-law, Marvin Brandt and Lawrence Rannow, a niece Vicky Sue Brandt; and an infant daughter.

Raymond Carlos Skiles, age 82, of Savanna, Illinois passed away Monday, April 26, 2021 at Clinton MercyOne Hospital. A funeral mass will be held Tuesday, May 25, 2021 at St. John the Baptist Catholic Church, in Savanna, IL, at 10:30 am. Visitation... View Obituary & Service Information

The family of Raymond C. Skiles created this Life Tributes page to make it easy to share your memories.

Send flowers to the Skiles family.