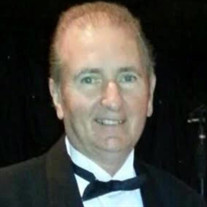 Raymond Martin Bernard Kumor, age 74, of Elizabeth, Illinois passed into the care of God on Thursday, January 6, 2022 at MercyOne Hospital in Dubuque. A Funeral Mass will be held 11:00 a.m. Friday, January 14, 2022 at St Mary Catholic Church in Elizabeth. Visitation will be held 3:00 – 7:00 p.m. Thursday, January 13, 2022 at Law Jones Funeral Home, Elizabeth, and one hour prior to the Mass at the Church. Masks recommended. A memorial has been established in his honor. Service may be viewed live on Facebook: http://bit.ly/3G6iWWJ Author Thomas Merton said, “If a man is to live, he must be alive, body, soul, mind, heart and spirit.” – Ray Kumor certainly lived! He was generous with his time and attention with his family, community and friends. He shared his talents with his students and enriched many lives with his music. He helped make this world a better place. Ray was born July 28, 1947 on Chicago’s south-side, the son of Martin Michael and Jean Theresa (Wisniewski) Kumor. His father worked in the steel mills and his grandparents lived upstairs in a two-flat. At the age of ten in 1957, Ray lost both parents, and was raised by his grandparents. He attended St. Mary Magdalene Catholic School, Chicago and then Sacred Heart Seminary in Donaldson, Indiana, where he graduated high school and entered the Novitiate as Brother Bernard, learning about becoming a missionary priest. He made the decision to pursue music and attended CVS Jr. College, then received a BA Degree from Northern Illinois University in Music, and later a Masters in Guidance Counseling. In 1973, Ray was giving music lessons to kids in Big Rock, Illinois where he participated in the Church choir, when he met the love the love of his life, Jane Ravnsborg. Ray had been playing in bands named the Top Hats and Omega, and by this time had formed a new band named Opus 5. He asked Jane to join the band and immediately they knew they had something special. On April 10, 1976, Ray and Jane were married in Big Rock. Opus 5 continued to perform until 1982 when Ray and Jane moved to the Hanover area near Chestnut Mtn., as they both began to teach at the Hanover schools. They later moved to Elizabeth when the schools consolidated. He coached and refereed several sports. Ray was also trained and helped many people using his skills in hypnotherapy, to quit smoking or ease pain. Ray and Jane raised two sons, Martin and Ryan and celebrated 45 years of marriage. Ray retired from River Ridge Schools in 2008. Ray and Jane loved family life, always spending time together with their sons, camping and traveling during the summers. Being together was the most important. After retirement, they spent time near Alamo, Texas where they enjoyed the community and friends. Ray has appreciated all the close friends he has had in this life, especially those from his childhood and growing-up years, several were in his bands and remain close today. They never stopped making music. Ray and Jane played in a well-known band named Delta until 2001, then they became Legends of Old-Time Rock & Roll, until 2012. They performed at the Trolley Theatre in Galena and it was during this time that Ray particularly enjoyed impersonating Elvis. While performing there, they were recognized and asked to perform on the Celebration Belle Riverboat. It is on the boat that Ray’s creativity took flight as he impersonated Mark Twain, Willie Nelson, Julio Inglesias, and even Cher or Dolly Parton, always with Jane by his side as the counterparts of Sonny or Kenny. They played 40s, 50s, 60 and 70s music along with many other themed cruises. It was a roar, and many people will remember their best times, dancing and enjoying Ray and Jane’s entertainment. Ray will be dearly missed by his wife, Jane of Elizabeth, Illinois; two sons, Martin “Marty” Kumor of Hanover and Ryan (Jennifer) Kumor of Hollandale, Wisconsin; and a grandaughter, Rylinn. He is preceded in death by his parents and a sister at a young age.

The family of Raymond Kumor created this Life Tributes page to make it easy to share your memories.

Send flowers to the Kumor family.