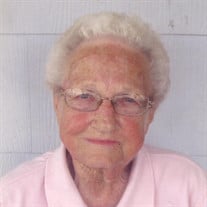 Peggy A. Huebner, of Sabula, IA, passed Saturday, April 23, at her home. Funeral service will be held at 11:00 a.m., Wednesday, April 27, at the Law Jones Funeral Home in Savanna, IL. Visitation will be from 4:00 p.m. to 7:00 p.m. Tuesday, April 26, at the funeral home, as well as one hour prior to the service on Wednesday. Burial will be in Evergreen Cemetery, Sabula. Memorials may be made to the Sabula Ambulance Association. Peggy was born September 15, 1930, daughter of Chester and Emalene (Bingham) Ackerman. She was raised in Savanna and Sabula. Peggy graduated from Sabula High School with the class of 1948. After graduating she worked for Clinton Engine in Maquoketa, and then worked at the Savanna Army Depot as an Ammo Inspector. It was around this time Peggy met the love of her life, Charles Huebner. The couple hit it off, and got married on April 10, 1955. Together, Peggy and Charles raised three children, and celebrated 48 years of marriage until Charles passing in 1998. If you were looking for Peggy you could usually find her driving around Sabula, behind the wheel of her car, moped, or golf cart. She rolled the streets, stopping at the Hop-n-Shop and City Hall, gathering all the town gossip. In the summer, Peggy would ride around in her golf cart with a bag full of DumDum suckers. She would throw out handfuls of candy to kids, like one woman parade. She probably gave out 3000 suckers every summer. When Peggy wasnt crusing the streets of Sabula she liked to fish the Mississippi, and play bingo at the Sabula VFW. Peggy and Pat Waidelich were the founding members of the Sabula VFW Auxillary. Peggy maintained her membership for her entire life. Peggy was also the Grand Marshall of Island City Days 2013. At the center of Peggy’s life was her family. She was a loving mother, grandmother, and great-grandmother. She cherished having her grandchildren and great-grandchildren come over and spend time. Too her great-grandchildren, she will always be known as “Grandma CooCoo”. Peggy will be dearly missed by her three children, Bentley (Debra) Huebner of Kellog, IA, Beth (John) Ritchie of Savanna, and Barry Huebner of Clinton, IA; 10 grandchildren, Emalene Huebner, Miranda Huebner, Ashley, Haley, Siena, Ben Ritchie, Willie Ritchie, Ethan Ritchie, Issac Ritchie, and Chad Coleman; 18 great-grandchildren; and one brother, Robert (Nancy) Ackerman of Eldridge, IA. Peggy is preceded in death by her husband, Charles, her parents, Chester and Emalene; and two brothers, Don, and Tom. Peggy’s children would like to give a special thank you to Mercy One Hospice for the super care they gave their mom, and also a special thank you to Anita Rabuck for taking care of Peggy.

The family of Peggy A. Huebner created this Life Tributes page to make it easy to share your memories.

Send flowers to the Huebner family.