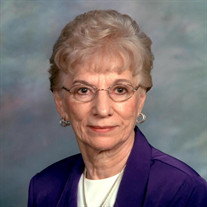 Pauline “Paula” Jean Kelsey, age 95, of Savanna, passed away Sunday, January 24, 2021 at Prairie Hills Assisted Living Center in Clinton, Iowa. A Funeral Mass will be held 11:00 a.m. Saturday, February 13, 2021 at St. John the Baptist Catholic Church in Savanna, with the Rosary and Eulogy beginning at 10:30 a.m. Inurnment will be in St. John’s Cemetery following the Mass. Memorials may be made in her honor for local charities. You can watch the live stream of Paula's service on Saturday by visiting this link: https://www.facebook.com/groups/431185721637753 Paula was born April 4, 1925, in Neffs, Ohio, the daughter of Joseph and Laura (Boyer) Molesky. After graduating high school, she received training in dress making and moved to New Jersey to work. It was there, that she met Robert Kelsey and they were wed on October 29, 1944. After the war, they moved to Savanna and raised three daughters. They celebrated 47 years of marriage until Robert’s death in 1992. Paula was a loving wife, mother and grandmother. She was extraordinarily gifted in domestic arts and fashion with a real zest for creating beautiful environments and wardrobes. She was a skilled seamstress who made many memorable dresses and suits for herself and her daughters. She loved cooking healthy meals which was a skill she learned from her Polish grandmother and passed on to her family. Her home was a visible reflection of all her creative talents and passions. Paula was very resourceful; she could make something out of nothing and turn it into a work of art. Jobs outside of her home included working at the Savanna Garment Factory, and several years working as a Nurse’s Aide at the Savanna City Hospital and Big Meadows Nursing Home. Paula was a devoted member of St. John the Baptist Catholic Church in Savanna where she taught 3rd Grade Religious Education for many years. She also enjoyed singing in the Church Choir. Her strong faith was the guiding force for her life. Paula enjoyed reading, playing cards, and golf. She always looked forward to getting dressed up for evenings out with her husband Bob to enjoy dinner, friends, music, and dancing. Paula will be dearly missed by her three daughters, Diane (Jerry) Hackett of Clinton, Iowa, Mary Ellen (Ronald) Brown of Thomson, Illinois, and Kathy (Marvin) Holmes of Savanna, Illinois; seven grandchildren, thirteen great-grandchildren, and one great-great grandson; and one sister-in-law, Mary Jo Tracey of Savanna. Paula is preceded in death by both parents; her husband, Robert; son-in-law, Dean Prowant; and brother, Frances.

The family of Pauline "Paula" Jean Kelsey created this Life Tributes page to make it easy to share your memories.

Send flowers to the Kelsey family.