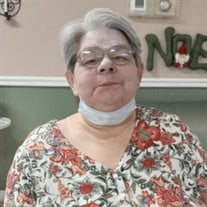 Paula Rice, of Rock Falls, IL, formerly of Thomson, IL, passed away Sunday, April 10, at Rock River Hospice and Home in Sterling, IL. A celebration of Paula’s life will be held from 12:00 p.m. to 2:00 p.m., Tuesday, April 19, at the Law Jones Funeral Home in Thomson. Memorial service will be held at 2:00 p.m. following the celebration of life at the funeral home. Paula was born December 19, 1949, daughter of Lawrence and Shirley (Tenley) Rice. She was the second oldest of 13 children. She grew up helping on the farm, and helping take care of her younger brothers and sister. Paula Attended Thomson schools. Afterwards, she began working at McGinnis’s in Thomson. Paula loved her little town of Thomson, and lived there for most of her life. Paula was a big bingo fan, and loved playing at the American Legion in Rock Falls where she was a member of the American Legion. She was also a lifetime member of the Eagles Club in Rock Falls. At home, Paula enjoyed puzzles, especially word searches. Paula’s greatest love was her family. She cherished time spent with her nieces and nephews, and would do anything for those she loved most. Paula will be dearly missed by her seven brothers, Richard (Connie) Rice, Donald (Susan) Rice, Terry Rice, Mike (Misty) Rice, Kevin (Melinda) Rice, Keith (Lisa) Rice, and Tommy (Melissa) Rice; one half-brother, Mark Burkeholder; her step-father, Russell Burkeholder; and many nieces and nephews. Paula is preceded in death by her parents, Lawrence and Shirley; three brothers, Steven, Gary, and Randy; her sister, Cathy; and her sister-in-law, Connie.

The family of Paula J. Rice created this Life Tributes page to make it easy to share your memories.

Send flowers to the Rice family.