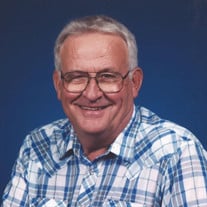 Paul Brunner, age 91, of Savanna, passed away on Saturday, February 26, 2022, at Rock River Hospice and Home, Sterling, Illinois. A funeral service will be held at 11:00 am Friday, March 4th at the First United Methodist Church in Savanna. Visitation will be prior to the service from 10:00 am to 11:00 am. Burial will take place in Center Hill Cemetery, Mt. Carroll. Memorials may be made to the Savanna American Legion or Rock River Hospice and Home. Paul was born December 14, 1930, on the family farm near Savanna, Illinois, the son of Philip and Florence (Holy) Brunner. He graduated from Savanna High School with the class of 1949. Paul was very involved in school organizations and clubs, and he joined the National Guard while in high school. He worked at the Savanna Army Depot after graduation, then enlisted in the US Army during the Korean War from 1952-1955. He served as a sergeant in the US Army Hospital 8167th Army Unit. After the war, Paul worked for the government in various capacities, from installing computer systems at military bases to working as a pipefitter. Paul loved to travel and crossed all 50 states off his travel log. Paul was a man of culture and a student of the many places he visited, learning about their people and customs. Upon retirement, Paul returned home to care for his parents and became an active member of his community. He volunteered at both the Carroll County Senior Center and Food Pantry and was always willing to help those in need. He was a member of the Savanna American Legion, VFW, and Korean War Veterans Association as well as the First United Methodist Church of Savanna. Most important to Paul was his family. He was a main source of fun for his nieces and nephews, always making time for them. His quick wit and dry sense of humor will be sorely missed by his family. Paul is survived by his brother, Glen Brunner, of Sterling; two nieces, Janice (Roger) Hartman and Karen Coulter; two nephews, Robert (Sheila) Brunner and Kurt (Pam Naples) Brunner; six great nieces and nephews, Phillip Hartman, Benjamin (Dawn) Hartman, Kate Hartman, Nicholas Brunner, Hillary Brunner, and Elizabeth Brunner; and two great-great nephews, Owen and Emmett. Paul was preceded in death by both parents, a sister-in-law Wilma Brunner, and a great niece Emily.

Paul Brunner, age 91, of Savanna, passed away on Saturday, February 26, 2022, at Rock River Hospice and Home, Sterling, Illinois. A funeral service will be held at 11:00 am Friday, March 4th at the First United Methodist Church in Savanna. Visitation... View Obituary & Service Information

The family of Paul R. Brunner created this Life Tributes page to make it easy to share your memories.

Paul Brunner, age 91, of Savanna, passed away on Saturday, February...

Send flowers to the Brunner family.