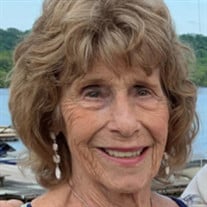 Patricia “Pat” Richardson, age 86, of Savanna, Illinois will be remembered as a dedicated Wife, loving and supportive Mother and Grandmother, and faithful child of God. She passed away Wednesday, April 8, 2020 at MercyOne Hospital, Dubuque, Iowa. A private family Funeral Mass will be held Monday, April 13, 2020 at St. John the Baptist Catholic Church, Savanna. Burial will be in St. John’s Catholic Cemetery. You may view the Funeral Mass on Facebook Live at 11:00 a.m. Monday, or afterward, by visiting the Law-Jones Funeral Home Facebook page online and scrolling down and on our website, lawjonesfuneralhome.com. A memorial has been established to benefit local charities. Patricia was born December 11, 1933 in Chula Vista, California, the daughter of Lossie and Katherine (Schiffadecker) Augustus. She enjoyed an idyllic childhood that included family picnics, digging clams at the beach, and hiking in the mountains of Southern California. She also remembered the challenging times of WWII when all coastal towns had “lights-out” orders to protect from invasion. Patricia was a graduate of the Chula Vista High School and San Diego State University where she studied Art. Shortly after high school she met and married the love of her life, Donald Richardson, who had just served in the US Navy during the Korean War. Patricia and Don moved to Illinois where Don found a job teaching at Niantic, Illinois and then his career brought them to Savanna, where Don served as the Superintendent of the Center Hill School near Mt. Carroll, and then served as the Principal at the Savanna High School and later the Lincoln Jr. High School. During this time Pat devoted herself as a homemaker, raising their two children, Becky and Dan. She served as a Girl Scout leader for many years and enjoyed school activities with her kids. Every other year, Pat took her children by train for a memorable trip to visit family back in California. Pat was a natural at making memories and having fun with her family, they would often hike, fish, and picnic together. Gardening for fresh vegetables and beautiful flowers, and walking daily were important to Pat. She kept a routine like a Marine, and would have more done by 8am than most people would get done all day. Don passed away in 1985 and another chapter of life began. During these years she counted on her faith, family and friends. Pat went to work at the Savanna Army Depot as an Administrative Assistant for twelve years, she then worked at Farm & Town Realty for seven years. Pat was very involved in St. John’s Church and had many friends in that tight-knit community. She was known for her coleslaw and fabulous homemade pies. She also loved taking adventurous trips all over the world with her best friend and sister, Betty. She will be dearly missed by her daughter, Rebecca (Wayne) McIntyre of Galena, Illinois; her son, Dan (Susan) Richardson of LeClaire, Iowa; seven grandchildren, Rachel McIntyre, James McIntyre, Grace McIntyre, Samantha Richardson, Amber Grabarek, Todd Knuth and Josh Knuth; and her sister, Betty Hoffman of San Diego, California. She is preceded in death by her husband, Donald in 1985; her sister, Beverly Augustus; two brothers, Richard and Edward Augustus; and both parents.

Patricia &#8220;Pat&#8221; Richardson, age 86, of Savanna, Illinois will be remembered as a dedicated Wife, loving and supportive Mother and Grandmother, and faithful child of God. She passed away Wednesday, April 8, 2020 at MercyOne Hospital,... View Obituary & Service Information

The family of Patricia "Pat" Richardson created this Life Tributes page to make it easy to share your memories.

Send flowers to the Richardson family.