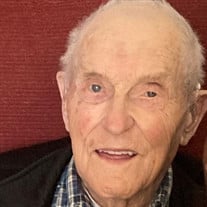 Nelson Dale Ford, age 90, of Carol Steam, IL, died Thursday, April 28, 2022 at home. Memorial Service will be held at 11:30 a.m. Friday, May 13, at the Law-Jones funeral home, 309 Chicago Ave, Savanna, IL. Visitation will be from 9:30-11:30 am, prior to the service at the funeral home. Burial will be at 2:00 p.m. at the Rock Island National Cemetery. Dale was born November 18, 1931 in Roscoe, MO to William and Buelah (Wright) Ford. He served in the U.S. Navy from 1950 to 1954 during the Korean War on the tanker U.S.S. Navasota and was honorably discharged. He married Joyce Haney on April 19, 1955 in Newton IA. While living in Savanna, IL, some of the businesses he worked for was Gibson (Pamida), Kentucky Fried Chicken, Drives Inc. He enjoyed fishing, reading and spending time with friends and family. Dale is survived by one daughter, Cindy (Michael) Wollenberg, Carol, Stream, IL; three sons, Danny (Chris) Ford, Cordova, IL; David (Denise) Ford, Wauconda, IL; Steven (Stephanie) Ford, Davenport, IA. Ten grandsons; Ryan, Joseph, Preston, Dakota, Wyatt, Joshua, Adam, Dylan, Trevor and Zachary. Four great grandchildren; Andrew, Lorelai, Amelia and a newborn girl. Dale was preceded in death by his parents, wife and all of his siblings, three brothers and one sister. In lieu of flowers, donations can be made to Savanna American Legion or Hines VA Hospital.

The family of Nelson Dale Ford created this Life Tributes page to make it easy to share your memories.

Send flowers to the Ford family.