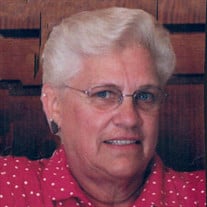 Nancy Belle Gipe, age 88, of Pearl City, IL, passed away on June 17, 2022 at Polo Nursing Home. A private family memorial service will be held, with burial to follow at Chadwick Cemetery. Family and friends are invited to share in Nancy’s life at lawjonesfuneralhome.com. Also, friends and family may watch the service live online at https://www.facebook.com/groups/374337001459796/?ref=share_group_link, at 2:00 p.m., June 22, 2022 or watch the service through the link at a later date. Nancy was born August 21, 1933, in Morrison, IL, the daughter of Marshall and Ivy (Olsen) Farthing. She attended Morrison schools until moving to Chadwick High School for her final two years of high school. On August 24, 1952, Nancy married Robert David Gipe at Chadwick Hope United Methodist Church, where they have remained members, ever since. They would go on to have four children. Nancy lovingly settled into her role as wife, mother, and homemaker. Above all else she valued time with her children, and eventually grandchildren, great-grandchildren, and great-great-grandchildren. As her kids and grandkids came into the world, she would make each of them a quilt, until she couldn’t quite keep up any longer. While her family was her favorite thing, her favorite place was probably the pond across the road from her home, complete with a gazebo and shelter. She and Robert would host all sorts of family gatherings there, and of course, a few shenanigans took place. None more fitting than the icy “plunges” the their family would do in the winter. She valued life’s simple pleasures, such as watching the geese and their babies nesting near the pond, and going square dancing with Robert once a month at the old Thomson high school. Nancy will be dearly missed by her husband, Robert; children, Gregory Gipe, of Pear City, Sherry (Bill) James, of Cordova, IL, and Dana (Tim) Geerts, of Rockford, IL; 12 grandchildren; 20 great-grandchildren; 5 great-great-grandchildren; and sister, Betty Wagner. Nancy is preceded in death by her parents, Marshall and Ivy; daughter, Tammy Gipe; granddaughter, Josee Pena; great-grandson, Joey Geerts; brother, Lawrence Farthing; sister, Shirley Prowant, parents-in-law, Ellwood and Helen Gipe; and daughter-in-law, Kay Gipe.

Nancy Belle Gipe, age 88, of Pearl City, IL, passed away on June 17, 2022 at Polo Nursing Home. A private family memorial service will be held, with burial to follow at Chadwick Cemetery. Family and friends are invited to share in Nancy&#8217;s... View Obituary & Service Information

The family of Nancy Belle Gipe created this Life Tributes page to make it easy to share your memories.

Send flowers to the Gipe family.