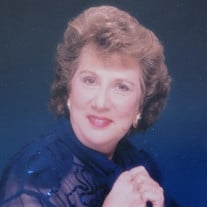 Myrna Kay Dague, age 77, of Camanche, IA, passed away Monday, September 20, 2021, at Eagle Point Nursing Home in Clinton, IA. A funeral service will be held at Calvary Lutheran Church, in Sabula on Monday, September 27, 2021 at 11am. Visitation will take place from 9am to 11am that morning. Burial will follow the service, at Evergreen Cemetery in rural Sabula. Family and friends are invited to share in Myrna’s life at lawjonesfuneralhome.com. Myrna was born September 28, 1943, in Iowa City, IA, the daughter of Frederick and Mary (Parson) Stoddard. She attended Sabula schools. On December 27, 1960, Myrna married Ronald Dale Dague, Sr. at Calvary Lutheran Church, in Sabula. The couple would go on to have four children. Myrna worked as a CNA for Windcrest Nursing Home, and later in home health care. She was a member of Eastern Star and the Sabula Fire Dept., where she was a firette. She loved her family dearly, and one of the ways she showed that love was through baking. When you walked in her home, you could always smell something delicious baking. She also enjoyed cross-stitch, sewing, and loving her grandkids. Myrna will be dearly missed by her children, Donal (Vicki) Dague, of Port Byron, IL, Ron Dague, Jr., of Camanche, IA, Lora Murphy, of Fulton, IL, and Marcia (Timothy) Lyons, of Camanche, IA; twelve grandchildren; 27 grandchildren; and two sisters, Sally (Terry) Norman, of Sabula, IA and Mary Bernall, of Tuscon, AZ. Myrna is preceded in death by her husband, Ronald; four brothers, Martin, Ronald, James, and Edward Stoddard; adopted sister, Shelly Stoddard; granddaughter, Candice Murphy; and son-in-law, Rob Murphy.

The family of Myrna K. Dague created this Life Tributes page to make it easy to share your memories.

Send flowers to the Dague family.