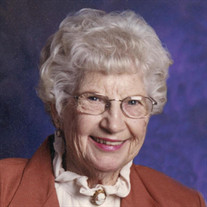 Muriel M. “Mickey” Buck, age 98, of Savanna, Illinois, died Sunday, May 23, 2021 at MercyOne Medical Center, Clinton, IA. A funeral service will be held at 1:00 p.m., Saturday, May 29, 2021 at St. Peter’s Lutheran Church, Savanna with burial in St. Peter’s Cemetery, Savanna. Visitation will be held 11:00 a.m. - 1:00 p.m. Saturday, prior to the service at the Church. A memorial fund has been established. Services may be viewed live on Facebook within Muriel's group: https://www.facebook.com/groups/339154840894398 Muriel was born February 7, 1923 in Arenzville, Illinois, the daughter of Albert A. and Ida (Nobis) Nicol. Muriel graduated from Arenzville High School and then attended Brown’s Business College in Jacksonville, IL. Muriel married Harold C. Buck on December 31, 1944 at Trinity Lutheran Church in Arenzville and they made their first home in Savanna, IL. They raised four sons and celebrated 70 years of marriage until Harold’s death in 2015. Muriel moved with her husband and family to Freeport, IL in 1955 so the children could attend Immanuel Lutheran School. In 1970 they moved back to Savanna. Muriel was very active in her St. Peter Lutheran Church of Savanna, as Sunday School teacher and headed the Vacation Bible School crafts for many years. She was a member and past president of the Lydian Society. Muriel was an avid reader and wrote many poems that she has shared with her family and friends. She enjoyed her card club and was a member for many years. She loved flowers and often shared them with friends and family. She loved traveling throughout the United States as well as making trips to Europe, Australia, New Zealand, Africa and Jamaica. She also enjoyed sharing fun with family and friends on their houseboat. There were many trips up and down the Mississippi River. She opened her home to three foreign exchange students throughout the years. Muriel will be greatly missed by her sons, Lowell (Diane) Buck of Pearl City, IL, Harold (Barbara) Buck of Brandon, SD and Timothy (Linda) Buck of Dunlap, IL; a daughter-in-law, Jane Buck of Davis, IL; 10 grandchildren, Christine (Bud) Windelborn, Joel Buck, Kelli (Jason) Higgins, Tara (Doug Papka) McGuane, Daniel (Jennifer) Buck, Angela Buck, Sarah (Marshall) Nehring, Kimberly (Kenneth) McCuen, Rebecca (Annie) Buck-Kemp and Amanda (Eric) Polcyn; 19 great-grandchildren; a sister, Shirley Ritchie of Savanna; a sister-in-law, Clarice Nicol of Jackson, Wisconsin; and a brother-in-law, Darwin Goss of Warsaw, Indiana. Preceding her in death are her husband, Harold in 2015; her son Scott in 2019; four brothers, Albert, Jr., Dwight, Wilber and Leland Nicol; a sister, Joyce Goss; and a brother-in-law, William Ritchie.

The family of Muriel M. "Mickey" Buck created this Life Tributes page to make it easy to share your memories.

Send flowers to the Buck family.