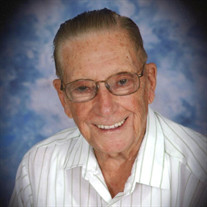 Miles H. Kahl, age 94, of Elizabeth, IL, passed away on November 16, 2021 at his home in Elizabeth. A Funeral Mass will be held at 11:00 a.m., Wednesday, November 24, 2021 at St. Mary’s Catholic Church, Elizabeth. A visitation will be held from 4:00 to 6:00 p.m., Tuesday, November 23, 2021 at Law-Jones Funeral Home, Elizabeth, as well as one hour prior to the service at the church from 10:00 to 11:00 a.m. Memorials may be made in Miles’ honor to St. Jude Children’s Hospital. Miles was born December 29, 1926, to Miles McKinley Kahl and Elizabeth ‘Lizzy’ (Wand) Kahl. Who lived on Madison Street, Elizabeth, Illinois from 1920–1926. His father was a blacksmith and his mother a homemaker. Betty and Miles started dating in their junior year at Elizabeth 1942 – 1943. They graduated in June 1944. He worked at Freeport Buick Company in Freeport. Soon thereafter Miles went to work at the Savanna Army Depot where his dad worked. He was a Munitions Handler in the Small Arms Plant. Then was transferred to Machines Shop working in the stockroom. Miles was drafted into WWII. He was in the Army in March 1945. He took basic training at Fort McLellan, Alabama. He was in the 22nd Battalion. He came home on a short leave in July 1945 and then reported to Fort Riley, Kansas. He shipped out to Fort Ord, Camp Beale in California for Boot Camp. After the completion of Boot Camp, he returned to Fort Riley, Kansas, to assemble and get ready to go overseas. He boarded his ship, USS James O’Hara, APA90 to San Francisco. He crossed the equator twice and after 31 days on ship landed at Manila Luzon, Philippines Island. Miles arrived at his destinations between the two big atomic bombings. He was transferred to the 4281 St. Quartermaster and became Company clerk. Then he was transferred to Headquarters Squadron of the 403rd Troop Carrier Group in the Air Corps at Clark Field on Luzon. He was assigned as Administrative Non-Commissioned Officer. His outpost was assigned Mail Delivery throughout the South Pacific from Hawaii to Australia. He was transferred again to the 13th Troop Carrier Squadron at Nichols Field in Manila, Luzon. He had a few trips as a Commander Officer’s Courier to Japan, Hawaii, and Australia Occasionally the pilot let him fly the C54 4-engine from Manila to Australia. He liked flying. Miles left Manila in October 1946 and arrived in San Francisco, California fifteen days later. He crossed the 180th Meridian, International Date Line going overseas and coming back. He went to Oakland Army Base and shipped out the next morning for Camp Beale, California, were he received an honorable discharge. He arrived home in October 1946 (Elizabeth, Illinois). His discharge took effect in December. Miles returned to work at the Savanna Army Depot as a Plumber’s Helper. Betty and Miles started dating again. He advanced to ‘Grade 9’ to become a Journeyman Plumber – Steamfitter then advanced to a lead position. Betty and Miles were married in St. Mary’s Catholic Church on May 8, 1948, at in Elizabeth, Illinois. They lived in Hanover, IL, for a short time. This was when they were blessed with their first child. They lived in Weston where they had three more children. They then moved to Elizabeth, IL. Miles became an assistant Foreman in Plumbing and Steam fitting section in 1964. He was appointed Assistant Chief of Utilities from 1970 to 1976. He was assigned as Foreman over Roads, Rails and Grounds, Preventive Maintenance Shop, Paint Shop and Sheet Metal Shop in 1976. Miles retired on December 30, 1981, with 37 years of service. Miles and Betty loved to travel. He liked to duck and squirrel hunt and drive their boat on the Mississippi. The family enjoyed many fun times over the years at their cabin on the Mississippi River. Miles was elected Mayor of Elizabeth in 1977. He served 4 terms (16 years) and retired in 1993 as Mayor. He belonged to the VFW in Hanover, Illinois where he acted as an Adjutant and a Commander. Miles started driving school bus as a substitute driver which turned into a regular route in 1985. He retired as driver in 1995. He was a Knights of Columbus member too. His favorite charity was St Jude’s Children's Hospital. After living on his own for five years he moved in with his son, Jim, and his wife in Durand, IL (May 2011) but he retained his house in Elizabeth. He moved back to Elizabeth, along with Jim and his wife, in March 2020. Miles left four children: Connie (Steve) Bogart, Jeanette (John) Biava, Janice (Ted) Rinehart, Jim (Connie) Kahl and six grandchildren and seven great-grandchildren.

The family of Miles H. Kahl created this Life Tributes page to make it easy to share your memories.

Send flowers to the Kahl family.