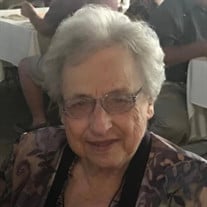 Mildred "Millie" Mary Driscoll, age 97, of Preston, Iowa, passed away peacefully with her family by her side Sunday November 21, 2021 at MercyOne in Clinton Iowa. A funeral mass will be held Monday November 29, 2021 at 10:30am at St. Joseph’s Catholic Church in Preston with Father Austin Wilker as celebrant. Burial will follow at St. Joseph Catholic Cemetery. A visitation will be held from 2:00-5:00 p.m. on Sunday November 28, 2021 at St. Joseph’s Catholic Church and then one hour prior to the funeral. A Rosary Service will be held at 1:30 p.m. prior to the visitation. Memorials may be given in Millie’s memory to the Preston Volunteer Fire Department, St. Joseph’s Catholic Church & Preston Legion & Auxiliary. Millie was born to Pete & Rose (Michel) Kilburg at home on January 25,1924 in Hells Hollow (Spragueville). Millie attended Spragueville and Springbrook Country Schools until she graduated 8th grade. Millie married Sylvester (Shorty) Driscoll on April 14, 1942 in Preston, Iowa. Millie and Shorty were married 50 years before Shorty’s death on August 13, 1992. Millie’s most important thing in her life was her loving family. Her second most important thing was her religion. She was the president of the Alter & Rosary society as well as a member of Confraternity of the Holy Rosary. Millie was a member of the Preston American Legion Auxiliary where she was still an active member after 72 years and held several offices, President, Secretary, Membership Chairman, and Historian. In Millie’s free time she enjoyed gardening, taking care of flowers at home and at church, playing 500, and baking. Millie had many jobs throughout her life, but her first was working for Skip Streuser in downtown Preston. Then she went on to work at the Preston Schools as a lunch lady for 10 years, followed by the Alverno as a CNA for 15 years. Caring for people came natural to Millie as throughout her married life and after she and Shorty had several people live with them and she continued caring for family members and neighbors for several years after. Millie had a talent that she shared with many throughout her life, and that was her love for crocheting. She always had a project or 2 going, and would be the first to offer to donate to any local benefit or fundraiser. She showered her family and friends with so many beautiful table runners, angels, snowflakes, and name plates that her work will forever be alive in the homes of so many. Millie is survived by her daughter Darlene (Tom) Pint of Janesville, Doug (Sandy) Driscoll of Preston, Dennis (Shirley) Driscoll of Preston, and Daughter-in-law Sharon Driscoll of Preston. Nine grandchildren Joseph (Amy) Driscoll, Johnny (Desiree) Driscoll, Brian (Kathy) Ritenour, Pam (Randy) Kittleson, Corey (Kendra) Driscoll, Shawna (Brent) Roling, Mitchell (Leah) Driscoll, Megan (Jeremy) Sullivan, Marshall (fiancé Megan David) Driscoll, twenty-one great grandchildren, and seven great-great grandchildren, and a sister in law Carol Kilburg of Preston. Millie is preceded in death by her husband, one son Dwayne on May 27, 2021, four brothers, Herbert, Raymond, Arnold, and Robert Kilburg, four sisters, Agnes McCarthy, Katherine Bormann, Marie Schmidt, and Rosemary Till.

Mildred "Millie" Mary Driscoll, age 97, of Preston, Iowa, passed away peacefully with her family by her side Sunday November 21, 2021 at MercyOne in Clinton Iowa. A funeral mass will be held Monday November 29, 2021 at 10:30am at St. Joseph&#8217;s... View Obituary & Service Information

The family of Mildred "Millie" Mary Driscoll created this Life Tributes page to make it easy to share your memories.

Send flowers to the Driscoll family.