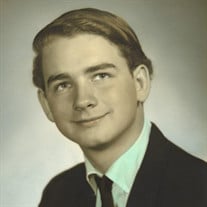 Michael Terry Hook, age 66, of Mount Carroll, IL, passed away Thursday, June 25, 2020, at FHN Hospital in Freeport, IL. A celebration of life visitation will take place at Law Jones Funeral Home, in Mount Carroll, from 1pm to 3pm, with a service at 3pm. As per the request of the family, face coverings will be required. Thank you for your understanding. Family and friends are invited to share in Mike’s life at lawjonesfuneralhome.com Mike was a true country boy with an outstanding work ethic. As a young boy he would help his grandma Shepherd clean out the chicken coop and horse barn every weekend. As he got older, he was given the duty of mowing the lawn and helped the neighbors out with hay baling. Mike had a passion for mechanical work, gaining most of his knowledge at the elbow of his father Don. Once he got his driver's license he could be found in his future brother's-in-law, Terry and Scott Young's garage tinkering on a car or other projects. Mike's greatest car passion was the '55 Chevy, but his true passion was for his wife of 44 years, Jo Ann. In 1983 he heard the calling of the open road and took his first job driving semi. A career that spanned 23 years over the road and 14 years at him current employment with Moring Disposal. As much as Mike liked driving truck, he always looked forward to coming home to his wife and pets at the end of the week. He had a great fondness for German shepherds and especially loved his golden retrievers, Josie, Zoe and Annie, who got him to walk off a week’s worth of sitting behind a steering wheel every chance they could get. After the passing of his parents, he had an even bigger job ahead of him, cleaning up their estate. But with the helping hand from his friend Lyle Diddens, the clean-up went much faster and many wondrous treasures were uncovered. The treasures of lives well lived now include the treasure of a son well raised. Mike will be dearly missed by his wife, Jo Ann; brother, Jim Hook, of Lanark, IL; sister, Tami Hook, of Rock Falls, IL; brother-in-law, Scott Young, of Savanna, IL; nephew, Joseph Young, of Brazil, IN; his best friend, Lyle Diddens, of Baileyville, IL; and his golden retriever, Annie and cat, Jake. Mike is preceded in death by his parents, Donald and Euveta; grandparents, Eber and Edna Shepherd; brother-in-law and dear friend, Terry Young; and father-in-law and mother-in-law, Chuck and Betty Young.

The family of Michael Terry Hook created this Life Tributes page to make it easy to share your memories.

Send flowers to the Hook family.