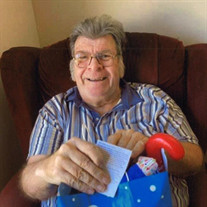 Melvin Fox, age 70, of Mount Carroll, IL, passed away Thursday, July 1st, at Allure Nursing Home in Mount Carroll. A graveside service will be held at 2:00 p.m. Wednesday, July 7th, at Upper York Cemetery in Argo Fay, IL. In lieu of flowers, memorial has been established. Mel was born November 11th, 1950, son of Roy and Della (Miller) Fox. He lived his entire life in Mount Carroll, and attended Mount Carroll High School graduating with the class of 1970. Soon after high school Mel began driving for Carroll County Transport. He was one of their first drivers, and got the opportunity to know many locals as he would drive them from place to place. Mel was an avid and skilled bowler. He grew up bowling with his father and siblings, taking part in friendly, but competitive, competitions with his brothers and sister. Mel took his love for bowling into his adult life. He bowled in the Fulton Bowling League as well as the Mount Carroll Bowling League for many years. Throughout his life, Mel won many tournaments and trophies. Mel was a friend to everyone. He was easy to talk to, and loved good conversation. He was a huge Cubs fan and never missed a game. A great joy of Mel’s was watching his nieces and nephews grow up, and he loved being an uncle. Melvin’s kind heart lives on in those he held close. Melvin will be dearly missed by his mother, Della Fox, of Mount Carroll; two brothers, Lonnie (Kathy) Fox of Albany, IL, and Larry (Dorothy) Fox of Central City, IA; one sister, Susie (Don) Meador of Cape Coral, FL; many nieces and nephews; and close friends, Carol Newcomer, and Merille Slick. Mel is preceded in death by his father Roy. Mel is also survived by a very special nephew and niece, John and Jodi Slick, who stood by him and aided him in the last couple of years. Mel was blessed to have them in his life. They were a blessing to the whole family.

The family of Melvin Fox created this Life Tributes page to make it easy to share your memories.

Send flowers to the Fox family.