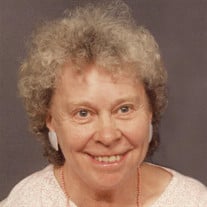 Mary Ann Schmidt, age 87, of Preston, Iowa passed away February 6, 2020 at the Maquoketa Care Center, Maquoketa, Iowa, where she lived the last 12 years, and will be thought of as, “One of the fondest residents at MCC.” A Funeral Mass will be held 11:00 am Tuesday, February 11, 2020 at St. Joseph Catholic Church, Preston. Visitation will be held from 9:00 – 10:45am, prior to the Mass. Family and friends are invited to share in Mary Ann’s life at www.lawjonesfuneralhome.com. Mary Ann was born July 12, 1932, on the family farm near Preston, the daughter of Thomas and Elizabeth (Lawlor) McDonald. She was the oldest of three daughters, including Betty and Theresa. They fondly remembered, as young ladies, walking and exploring on the family farm and visiting grandma and grandpa next door. As a family they attended St. Joseph Catholic Church, Sugar Creek. Mary Ann attended the Goose Lake Schools, graduating from Mount St. Clare Academy in 1950, and Mount St. Clare College in 1952. By this time, music had become Mary Ann’s passion. She loved to sing and play the piano. Besides music, Mary Ann also became passionate about the young man she met at the Melody Park Dance Hall in Preston, and on May 28, 1955, Mary Ann married Gerald Schmidt. They raised a son, Greg, and celebrated 57 years of marriage until Gerald’s passing in 2013. After a house fire in 1964 on the farm, Mary Ann and Gerald moved into town at Preston, where they became members of St. Joseph Catholic Church of Preston. She was a homemaker all of her life, and there was never a dull moment when Mary Ann was involved. Playing the piano and singing, always kept her in a joyous mood, although Gerald lovingly referred to her as “Bucky” when he felt she was being stubborn about something. Her favorite holiday was St. Patrick’s Day when she could be proud of her Irish ancestory. A close second was Halloween when the kids were having fun. Visiting with her friends and family became her most treasured time. Mary Ann will be dearly missed by her son Greg Schmidt of Dewitt, Iowa; three grandchildren, Kaitlin, Adam and Nick; two sisters, Betty Grindley of Coralville, Iowa and Theresa (John Mayo) McDonald of Iowa City, Iowa; and several nieces and nephews. Mary Ann is preceded in death by her husband, Gerald, and both parents.

Mary Ann Schmidt, age 87, of Preston, Iowa passed away February 6, 2020 at the Maquoketa Care Center, Maquoketa, Iowa, where she lived the last 12 years, and will be thought of as, &#8220;One of the fondest residents at MCC.&#8221; A Funeral... View Obituary & Service Information

The family of Mary Ann Schmidt created this Life Tributes page to make it easy to share your memories.

Send flowers to the Schmidt family.