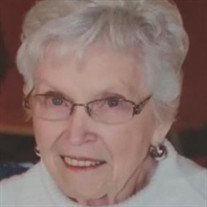 Mary Jo Tracey, age 91, of Savanna, IL, passed away at Resthave Nursing Home, in Morrison, IL on Monday, May 16, 2022 surrounded by her six loving children. A funeral mass will be held at St. John the Baptist Catholic Church, in Savanna, on Friday, May 20, 2022, at 10:30 am. Visitation will take place in St. John’s Antl Hall prior to mass, from 9am to 10:30am. Inurnment will take place at Rock Island National Cemetery. Family and friends are invited to share in Mary Jo’s life at www.lawjonesfuneralhome.com. Mary Jo was born March 14, 1931, in Savanna, IL, the daughter of Norman and Kathryn (McNamara) Kelsey. She graduated from Savanna High School with the class of 1949. On May 19, 1951, she married John R. Tracey. Soon after their marriage, the young couple moved to Camp Pendleton in Oceanside, CA, where John was stationed with the Marine Corps. When John was sent to serve in Korea, Mary Jo moved back to Savanna. Upon his return and honorable discharge from the Marine Corps, John and Mary Jo began their civilian life together. They would go on to have six children. She drove school bus for Ritchie Bus Service for twenty years. Mary Jo was active with St. John the Baptist Catholic Church and Savanna Women’s Service Club. Mary Jo loved playing bridge and was so proud when she won tournaments. She loved sports. She was an avid Chicago Bears, Chicago Cubs and Fighting Illini fan. But that didn’t compare to her pride and support of her own children’s sporting events, whether they were a participant or a coach. It would be impossible to count the number of sporting events she attended for her own children as well as her grandchildren. Mary Jo was a great cook. She loved cooking for her big family, especially Thanksgiving and Christmas dinners. Mary Jo was a one-of-a-kind matriarch who raised her children in a loving Catholic environment. She instilled a strong work ethic and family loyalty. Mary Jo will be deeply missed by her family. Mary Jo is survived by four sons, Mike (Geri) Tracey of Moline, IL, Pat (Barb) Tracey of Savanna, IL, Tom (Rita) Tracey, of Princeton, IL, and Dan (Stephanie) Tracey, of St. Charles, IL; daughters, Colleen McNinney, of Myrtle Beach, SC and Kelley (Joe) Bellich, of Thomson, IL; 13 grandchildren; and 25 great- grandchildren with two more on the way. Mary Jo is preceded in death by her parents, Norman and Kathryn; husband, John; three brothers, Milton (June), Bob (Paula), Tom (Sylvia) and son-in-law, John McNinney.

Mary Jo Tracey, age 91, of Savanna, IL, passed away at Resthave Nursing Home, in Morrison, IL on Monday, May 16, 2022 surrounded by her six loving children. A funeral mass will be held at St. John the Baptist Catholic Church, in Savanna, on... View Obituary & Service Information

The family of Mary Jo Tracey created this Life Tributes page to make it easy to share your memories.

Send flowers to the Tracey family.