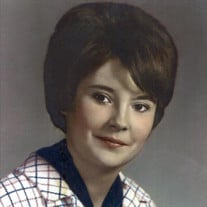 Mary Jo Holcomb of Savanna, IL passed peacefully on April 30, 2020 after a brief illness. Mary Jo Bristol was born December 28, 1949 in Rockford, Illinois, the daughter of Robert and Marion Bristol of Thomson, Illinois. She lived all of her life in the Thomson area, was educated in the Thomson schools and held a CNA certificate. She was employed at various jobs during her working years, including the Sabula Battery Factory, Egan Valves and Controls, Drives of Fulton, Eagle Point Nursing Home, and Ralston Purina. Mary Jo was lively, to say the least, and will be greatly missed by her friends and family. She had a sharp wit and said exactly what she thought. You knew where you stood with Joey. In her younger years, she enjoyed The Harley Lifestyle and especially loved riding through Palisades Park. She later explored the countryside hunting asparagus, morels and ginseng. Mary Jo loved life, enjoyed turtle fries, country fairs, doing word puzzles and developed quite a crush on Blake Shelton. She adopted every stray cat in her neighborhood. Mary Jo is survived by a son, Bobby Bristol, grandchildren, Anthony Bristol, Jordan Bristol and Shammanna Bristol all of Lakeland, Florida; granddaughter, Jersey Holcomb of the Quad Cities; great-granddaughter, Evy Lynn Bristol and great-grandson, Brennen William Robinson, both of Lakeland. She is also survived by her sister, Jan Bristol, nephew, Leigh Holden, nieces, Heather Holden and Hannah Holden, as well as her beloved cat, NoNo. She was predeceased by her husband, Stephen Wade, husband Robert Holcomb, longtime companion, Jim Eads, and her sons, Michael Holcomb and Brian Chastain. A memorial service will be held at a later date. In the meantime, have a beer and remember her well. She had a hard ride, but never lost the twinkle in her eyes.

Mary Jo Holcomb of Savanna, IL passed peacefully on April 30, 2020 after a brief illness. Mary Jo Bristol was born December 28, 1949 in Rockford, Illinois, the daughter of Robert and Marion Bristol of Thomson, Illinois. She lived all of her... View Obituary & Service Information

The family of Mary Jo Holcomb created this Life Tributes page to make it easy to share your memories.

Send flowers to the Holcomb family.