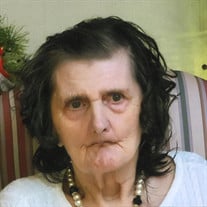 Mary Faye Hojnacke, age 84, of Savanna, IL, passed away Sunday, May 16, 2021, at Clinton MercyOne Hospital. Private family arrangements have been made. Mary was born April 2, 1937, in Savanna, IL, the daughter of Clarence and Lillian (Gilbert) Notz. She attended Sabula, IA schools, graduating from Sabula High School with the class of 1955. On June 18, 1955, she married Francis Hojnacke. Mary worked for the Sabula Oxford Factory for 18 years, then Collis in Clinton, then Central Steel, from which, she retired. All the while, Mary maintained the important role of homemaker for her beloved family. Later in her life, she became known for her service as the Sabula paper girl, delivering papers until she was 73 years old. Mary was a fiercely dedicated mother and grandmother; after her husband passed away she raised her three children on her own. Family came first to Mary. She would do just about anything for her family, especially her grandchildren. Mary was very active, as she loved to ride her bike around Sabula and visit with her neighbors and friends. She was an avid Cubs fan and enjoyed going to Wrigley Field as much as she could. Mary will be greatly missed by her family and friends. Mary is survived by her children, Cindy (Luis) Soto, of Savanna, IL, Linda (Eric) Haldorson of Arizona, and Michael (Lynne) Hojnacke, of Texas; grandchildren, Chris (Sara) Soto, of Cedar Rapids, IA, Nick (Miranda) Soto, of Savanna, IL, Alayna Soto, of Maquoketa, IA, and Andrew (Terasa) Haldorson, of Arizona; step grandchildren, Rob Silvis, of Texas and Traci Silvis, of Washington; great grandchildren, Jaycee, Lillian, Emma, Mauriella, Ellie, Everette, and Olivia; and a sister, Helen (P.A.) Rummel of Ohio; and many nieces and nephews. Mary is preceded in death by her parents, Clarence and Lillian; husband, Francis; daughter, Rosemary Hojnacke (infant); grandchildren, Keaton and Kalli Hojnacke; and bother, Clarence “Honk” (Gayle) Hojnacke.

Mary Faye Hojnacke, age 84, of Savanna, IL, passed away Sunday, May 16, 2021, at Clinton MercyOne Hospital. Private family arrangements have been made. Mary was born April 2, 1937, in Savanna, IL, the daughter of Clarence and Lillian (Gilbert)... View Obituary & Service Information

The family of Mary Faye Hojnacke created this Life Tributes page to make it easy to share your memories.

Send flowers to the Hojnacke family.