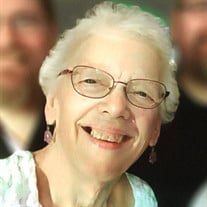 Mary Jeanette Gibson of Preston, IA, passed away Wednesday, September 8th, at her home surrounded by her children. Funeral service will be at 10:00 a.m. Monday, September 13th, at St. John’s Lutheran Church in Preston. Visitation will be from 4:00 p.m. to 8:00 p.m. Sunday, September 12th, at the church, as well as one hour prior to the service. Memorials may be made out to St John's Church or to a charity of your choosing. Mary was born August 23rd, 1945 at Clinton Mercy Hospital. She was the only child of Cecil and Phyllis (Denlinger) Johnson. She was educated in Clinton Schools and graduated in 1963. She attended Clinton Community College and University of Northern Iowa. She graduated from UNI in January 1968 with an elementary teaching degree. She taught for seven years at Northeast schools, and 28 years in Preston (Easton Valley) until her retirement in 2005. Mary met Raymond S. Gibson December 31st, 1963. After their first meeting Raymond was smitten with Mary. Under the guise of needed help buying a gift for his sister Doris, Raymond found an excuse to spend more time with Mary. The rest is history. Mary and Raymond married June 17th, 1967. They celebrated 24 years of marriage until Raymond's passing in 1991. Together they had three children; Dr Jennifer Petersen of DeWitt, IA, and twins James (Kristi) Gibson of Muscatine, IA, and Joseph (Jessica) Gibson of DeWitt. Mary will be dearly missed by her three children; 12 grandchildren, Kathryn, Brandt, Klaire, and Brady Petersen; Kasi, Megan, and Carl James “CJ” Gibson; Raelynn, Xander, Dresden, Zoe, and Quincy Gibson; one great-granddaughter, Mikayla Petersen; sister-in-law Doris (John) Mack; and brother-in-law Dan (Tracy) Gibson. Mary loved and was proud of her entire family. She liked to play cards, go to casinos, and take bus day trips. In her younger days she liked to bowl and play volleyball. Mary was an avid Hawkeye fan. Mary was a fiercely active member of her community. She had been a member of the Jackson County Pork Board, and the Preston Library Board. She was also a member of the County Retired School Personnel, and St John's Church council. After her husband's passing Mary was a champion of the New Hope Organ Support in DeWitt. Mary was a Jackson County representative on the Eastern Iowa Housing authority, and a Sunday school teacher and volunteer for Vacation Bible School. Mary was preceded in death by her loving husband, Raymond, as well as her parents, Cecil and Phyllis.

The family of Mary Jeanette Gibson created this Life Tributes page to make it easy to share your memories.

Send flowers to the Gibson family.