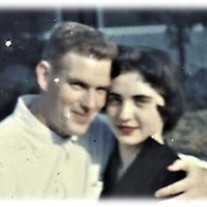 The family of John and Mary Ann Blossfeld will be holding a Memorial Service for them on Saturday, July 2, 2022 at 10:00 a.m., at St. Joseph’s Cemetery in Preston, Iowa. The Memorial Service is being held for family and close friends in connection with the interment of the burial urns of Mr. and Mrs. Blossfeld together at St. Joseph Cemetery. Mary Ann (Weno) Blossfeld passed away in December 2009 at age 74. Her husband, John (“Jack”) Blossfeld passed away in July 2021 at age 88. Friends and family may watch the service live online at https://www.facebook.com/groups/1035517853742641/?ref=share_group_link. at 10:00 a.m., Saturday, July 2, 2022 or watch the service through the link at a later date. Jack Blossfeld, the son of Seeman and Dorothy Blossfeld, grew up in the Preston area. He was the fourth of six children. Jack graduated from Maquoketa High School in 1953 and joined the Army shortly thereafter. He served over-seas in Europe during its reconstruction after WWII. After discharge from the military, Jack returned to Iowa to attend school at the University of Iowa. Mary Ann (Weno) was the only daughter of Louis and Ida Weno. She grew up with her parents and three brothers on a farm outside of Iowa City, Iowa. She graduated from University High School in Iowa City, and then, she attended the School of Radiological Technology at Mercy Hospital in Iowa City. After graduating from Mercy in 1956, she worked her way up to the head technician position at Mercy’s Radiology Department. Jack and Mary Ann met in Iowa City while attending school and became engaged in December 1956. They got married the following Spring. After marrying, the couple moved to Maquoketa, Iowa to start a family. They had six children (five girls and one boy). Jack spent most of his career working in sales for the Utility Equipment Company of Bettendorf, Iowa (a job for which he was particularly well-suited due to his outgoing nature), while Mary Ann ran the household. The couple moved their family back to Iowa City in 1976 to be closer to Mary Ann’s family and the University. Jack retired in 1998, and the couple moved to Green Valley, Arizona to enjoy their retirement years. Jack and Mary Ann were great nature lovers. They took many road-trips to various State and National Parks, where they would fish, hike and enjoy the great outdoors. In addition, the couple loved spending time with their friends and extended family. They could often be found in the middle of the fun at Iowa football tailgate parties, family reunions, holiday gatherings, weddings, and other family functions. They are greatly missed by their six children, nine grandchildren, five surviving siblings, three surviving sisters-in-law, thirty nephews and nieces, and many friends.

The family of John and Mary Ann Blossfeld will be holding a Memorial Service for them on Saturday, July 2, 2022 at 10:00 a.m., at St. Joseph&#8217;s Cemetery in Preston, Iowa. The Memorial Service is being held for family and close friends... View Obituary & Service Information

The family of Mary Ann Blossfeld created this Life Tributes page to make it easy to share your memories.

The family of John and Mary Ann Blossfeld will be holding a Memorial...