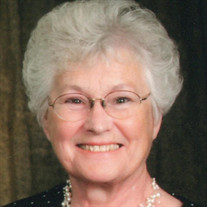 Marlene Joan (Henneberry) Cahill, 87, of Preston, Iowa passed away August 31, 2020 at the Alverno in Clinton, Iowa. She was the beloved wife of the late Dr. James P. Cahill. She was born in Garryowen, Iowa on July 8, 1933, the daughter of the late Vincent and Catherine (Flanigan) Henneberry. She grew up in the home of her Aunt Clara (Henneberry) and Uncle Albert Stickley which was just down the road from her parents’ farmhouse. Her favorite memories of childhood were riding her horse and spending time with her eight siblings on the family farm. She was a registered nurse and 1954 graduate of Mercy Nursing School in Dubuque, Iowa. After graduation, she worked in the polio ward in Iowa City, serving patients who were being treated in iron lungs. On June 23, 1956 at St. Patrick’s Catholic Church in Garryowen, Iowa, she married James Cahill and they remained constant companions for over 60 years. While James finished medical school, Joan worked at St. Anne’s Hospital in Chicago until her children were born. Later she joined her husband working as a nurse at their Preston Medical Clinic. She dedicated the majority of her adult life to caring for her family of six children. She was famous for her homemade bread, cinnamon rolls and pumpkin pie. She also sprinkled every conversation with a fun loving sarcasm – a trait abundant in the Henneberry clan and one she passed on to each of her children. She was a proud sponsor of the Preston Community Schools and when she was elected to the school board in 1974, the Preston Times stated she was the first woman elected to the board in nearly 50 years. She was a faithful member of St. Joseph’s Catholic Church in Preston, serving in many capacities including religious education instructor. She enjoyed swimming and walking. She also loved to travel and could be ready to go at a moment’s notice – especially to visit her grandchildren. She fondly remembered her trips to Italy, Ireland, Spain and the Cayman Islands as well as numerous U.S. locations such as Alaska and Hawaii. She and her husband once took their children on a 30-day camping trip to California and many of the western states – a trip that generated many long-lasting memories. She was especially proud of her six children and four grandchildren. Her children include Joseph (Chicago, IL), William (Ames, IA), Ellen (David) Pusateri (Fishers, IN), Daniel (Elizabeth) (Denver, CO), John (Soojin) (New York, NY), and Michael (Dubuque, IA). Known to them as “Nana”, her four grandchildren include Jacob, Anna, and Jessica Pusateri and Daehan Cahill. She was the sister of Sr. Kathleen Henneberry CHM, Joyce (Ray) Stratton and Richard (Arlene) Henneberry. Siblings passing before her include Luella, Melvin and John Henneberry as well as Maxine O’Connell and Doris Feeney. A private mass and burial will be held at St. Patrick’s Catholic Church in Garryowen, Iowa 52032 on September 8, 2020. In lieu of flowers, donations may be made in her memory to St. Patrick’s Catholic Church. Sympathy cards can be sent to Michael Cahill 1488 Wingate Dr. Dubuque, IA 52002. The family would also like to thank the staff at the Alverno Senior Care Center who took such good care of our mother the past three years.

Marlene Joan (Henneberry) Cahill, 87, of Preston, Iowa passed away August 31, 2020 at the Alverno in Clinton, Iowa. She was the beloved wife of the late Dr. James P. Cahill. She was born in Garryowen, Iowa on July 8, 1933, the daughter of the... View Obituary & Service Information

The family of Marlene Joan (Henneberry) Cahill created this Life Tributes page to make it easy to share your memories.