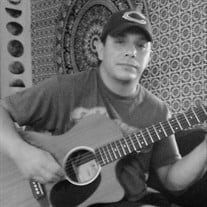 Mark Lee Smith, age 41, of Savanna, IL, passed away Thursday, June 25, 2020 at FHN Hospital in Freeport, IL. A visitation will be held at Law Jones Funeral Home in Thomson, IL, on Monday, June 29, 2020 from 5pm to 7pm, with a time of sharing at 7pm. Mark, son of Melody Andrews and Thomas Talley, Jr., was born on January 9th, 1979 in Detroit, Michigan. Mark graduated from Thomson High School in 1997. Mark married Abby Hoch on June 8, 2007 in St. Anne’s Parish, Jamaica. A son, Brody Thomas, was born to their union on October 11, 2010. As years past, Mark found his soulmate, Amanda Richeson and her daughter, Olivia and the four became one. Mark was an amazing father, a beloved son, an incredible brother, a wonderful nephew, great cousin, one heck of a fantastic uncle, and a good friend. Mark gained his love of music from his father, Tom and always seemed to have a guitar in his hand. His dog, Marley was never far behind him. Mark and his son were inseparable. They had their own special language and if you were a friend of Mark’s, you definitely understand. You always seemed to catch Mark and Brody making the “Horn Sign” and “The Face”. They also shared a love for playing games, playing baseball, gaming, Cubs games, and mini-vacations. Mark shared his love of music and sports with his son, Brody and most recently had begun to teach him to play guitar. Mark lovingly referred to his Mom Mel and her sisters as the “Golden Girls” and never let them live a minute of that down. Mark will be dearly missed by his soul mate, Amanda Richeson, of Savanna, IL; son, Brody Smith; daughter, Olivia McGinnis; mother, Melody Andrews, of Thomson, IL; father, Tom (Laurie) Talley, of Thomson, IL; brothers, Gary Smith, of Clinton, IA, Tommy Talley, of Boise, ID, and Daniel Bellich, of Stevens Point, WI; sisters, Stephanie Seidemann, of Savanna, IL, Tamara Talley, of Thomson, IL, and Wendy Koenes, of Thomson, IL; paternal grandmother, Sandy Payton-Nowell; his first love, Abby Smith, of Thomson, IL; as well as many extended family members and friends. Mark is preceded in death by his maternal grandmother, Vivian Andrews; paternal grandfather, Thomas Talley, Sr.; and sister, Shelley Buchholz.

Mark Lee Smith, age 41, of Savanna, IL, passed away Thursday, June 25, 2020 at FHN Hospital in Freeport, IL. A visitation will be held at Law Jones Funeral Home in Thomson, IL, on Monday, June 29, 2020 from 5pm to 7pm, with a time of sharing... View Obituary & Service Information

The family of Mark Lee Smith created this Life Tributes page to make it easy to share your memories.