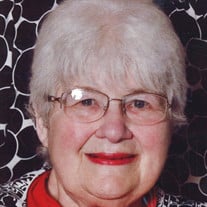 Marjorie Ann Smith, 83, of Thomson, Illinois formerly of Elizabeth, Illinois passed away on Saturday, October 24, 2020 at Rock River Hospice and Home, in Sterling. Honoring her wishes, cremation rites have been accorded. Due to family health concerns, services have been postponed until further notice. Marjorie was born on January 24, 1937 in Clinton, Iowa. She was the daughter of Ernest and Dora Lee (Wilson) Smith. She grew up on the family farm east of Thomson and returned there for her final weeks of life. She graduated from York Community High School in 1953 and Western Illinois University in 1957 with a degree in business. After college, she moved to California where she got in on the ground floor of computer programming. She continued this career path by working for several companies in California, Illinois, and Iowa. She developed a great interest in family history and genealogy and operated Heritage House, a genealogy publishing company in the 1970’s. She moved back to the area in 1980’s and did extensive research on Jo Daviess County history and lead miners. She retired in 2007 with Eagle Ridge Resorts in Galena. Marjorie was an accomplished pianist. Her interests included needlework and reading and had an extensive book and magazine collection. She also had a passion for genealogy and traced her family roots back to the Revolutionary War. Marjorie is survived by one sister, Nancy Green, and one brother, Larry (Jean) Smith, both of Thomson, nephews Jeff (Priscilla) Green of Frankfort, IL, Brian (Cindy) Green of Warren, IL, Bart (Ellen) Smith of Morrison, IL, Judd (Terri) Smith of Thomson, and nieces Gwen Smith of Thomson, Julie (John) Skornia of Fulton, IL and Ileen (Tom) Goldensoph of Low Moor, IA, and several great and great-great nieces and nephews. She was preceded in death by her parents, brother-in-law Charles Green, and a niece and nephew in infancy. Memorials made can be directed to the family.

Marjorie Ann Smith, 83, of Thomson, Illinois formerly of Elizabeth, Illinois passed away on Saturday, October 24, 2020 at Rock River Hospice and Home, in Sterling. Honoring her wishes, cremation rites have been accorded. Due to family health... View Obituary & Service Information

The family of Marjorie A. Smith created this Life Tributes page to make it easy to share your memories.