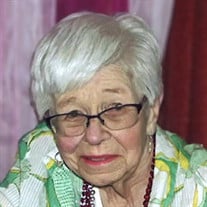 Marian G. Van Kampen, age 86, of Milledgeville, IL, passed away in the early morning hours of April 16, 2020, at Heritage Woods of Sterling. A private family service will be held, and burial will take place at Chadwick Cemetery. Family and friends are invited to share in Marian’s life at lawjonesfuneralhome.com Marian was born February 14, 1934, in Milledgeville, IL, the daughter of JC “Clifton” and Barbara (Heide) Cartwright. She attended Jefferson Country School in rural Chadwick. On October 10, 1952 Marian married Harold “Bud” Van Kampen in Chadwick, IL. Marian was a loving wife and hard worker, dedicating more than 30 years to Lawrence Brothers Manufacturing in Sterling, IL. In her free time, she enjoyed sifting through rummage sales and tending to her flowers. But perhaps her favorite activity of all, was camping with Harold. Each year they would pack up their trailer and head north to Wisconsin to enjoy the great outdoors. They’d spend their days fishing, boating, and soaking in nature. They often were fortunate enough to make these trips with their good friends Wayne and Fay Dingman, and even after Harold’s passing, Marian made her way to the Wisconsin wilderness on many occasions. Though Marian and Harold weren’t fortunate enough to be given an opportunity to raise their own children, they didn’t let that limit the love they could offer. Marian treated her nieces and nephews like they were her own, showering them with a sort of motherly affection. Her dogs, always beagles, also held a special place in her heart. Marian will be dearly missed by her sisters-in-law, Carol Cartwright, of Chadwick, IL and Carrie Cartwright, of Dixon, IL; niece, Angeline (Kevin) Kroll, of Hampton, IL; nephews, Elwood (Donna) Cartwright, of Midland, MI and Joseph (Karen) Cartwright, of Gilroy, CA; grand-niece, Haley; and grand-nephews Brandon and Chase; and great grand-nephew Axel. Marian is preceded in death by her parents, James and Barbara; husband, Harold; a son and daughter who both passed as infants; and two brothers, James Cartwright and Lyle Cartwright.

Marian G. Van Kampen, age 86, of Milledgeville, IL, passed away in the early morning hours of April 16, 2020, at Heritage Woods of Sterling. A private family service will be held, and burial will take place at Chadwick Cemetery. Family and friends... View Obituary & Service Information

The family of Marian G. Van Kampen created this Life Tributes page to make it easy to share your memories.