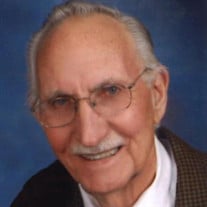 Preston Iowa – 89-Year-old Lyle Arthur Duhme passed away at Mercy Hospital, Clinton IA, October 23, 2020 due to complication from the COVID virus. A private family graveside service will be held at Andrew Cemetery. Friends and family may join the service virtually at facebook.com/lawjonesfuneralhome. He was a resident of the Big Meadows Nursing home in Savanna, IL. He was a member of the Methodist Church in Preston Iowa. In lieu of flowers memorials may be made out to the Preston American Legion at PO Box 51, Preston IA, or the Jackson County Historical Society at 1212 E Quarry St. Maquoketa, IA. Lyle stated that he had felt very fortunate to have had a happy and blessed life. He said he strived to be good. Friends and family report that Lyle was a gentleman, kind to others, and a loving person to all. His warmth also included all animals and pets. Folks have commented that animals had no better human friend than Lyle. Lyle’s life journey included growing up on the family farm north of Spragueville, Iowa. A 1947 graduate of Preston High School after which he worked on the railroad from 1948 to 51. He then served in the Army (Court Reporter in Germany 1952-54) and was a farmer from 1954 to 2003. His lifetime occupation was as a U.S. Postal Rural Carrier from 1957-97. Locally he proudly carried the nickname “Mr. Zip” when zip codes were introduced. We was awarded the Postal Service “Million Mile” safe driver award twice. Lyle was a lifelong bowler and 700 Club member during his never-ending quest to be the best he could be. He enjoyed collecting coins, stamps, playing cards, dancing, traveling, and, most importantly, Chicago Cubs games. Lyle was a 60+ year member of The American Legion. A Distinguished Member and past president of The National Active and Retired Federal Employees Association, Lifetime member of the Jackson County Historical Society, and an Iowa Farm Bureau member. Lyle was a lifelong blood donor contributing just short of 25 gallons to the Mississippi Valley Regional Blood Center and Red Cross before the doctors said, “no more”. Lyle and his wife Dona (Meyer) were married in 1954. Lyle expressed his eternal love and devotion to his wife Dona. They truly were a spiritual match. They did not have any children however, they enjoyed entertaining the many nieces, nephews, and god children on their farm and later at their retirement home outside of Preston. Lyle loved kids, and they report having fond memories of their experiences with Lyle. Pets were ever present at the Duhme home and Lyle and Dona dedicated themselves to their happiness. Lyle was preceded in death by his parents Frank and Ruth (Nims) Duhme, Sisters: Dorothy (Duhme) Gregory, Francis (Duhme) Asay, Marjorie (Duhme) Meyer, brother Victor Duhme and his wife Dona (Meyer) Duhme. Lyle will be missed by his surviving sister Glenna Palmer (North Liberty) and his many nieces, nephews, godchildren, and friends. On behalf of all who knew him, Farewell good friend.

Preston Iowa &#8211; 89-Year-old Lyle Arthur Duhme passed away at Mercy Hospital, Clinton IA, October 23, 2020 due to complication from the COVID virus. A private family graveside service will be held at Andrew Cemetery. Friends and family may... View Obituary & Service Information

The family of Lyle A. Duhme created this Life Tributes page to make it easy to share your memories.

Send flowers to the Duhme family.