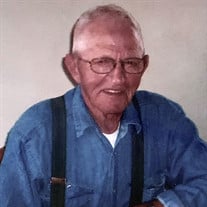 Loyd Downey, 87, of Preston, Iowa, passed away January 1, 2021 at Mercy One Hospital in Clinton, Iowa. A private service will be held at Law Jones Funeral Home, Preston. Burial will be held at Preston Cemetery. Loyd was born on October 12, 1933 in rural Preston to Ben and Grace Downey. He grew up on a farm and continued farming as a lifelong career. He attended country school in rural Preston and Elwood Community Schools, and graduated from Preston High School. He served in the US Army during the Korean War 1954-56. Loyd married the love of his life, Barbara, on October 4, 1953. Loyd enjoyed being with family and friends. He loved watching and listening to local and national sports. He often communicated with his family through text messages using his very own “Loydie Grams.” He especially loved the Chicago Cubs and Da Bears. Loyd also liked playing cards with his pinochle club. He taught each of his children to play Rummy while entertaining everyone with his own brand of wit and humor. He was a member of the Preston American Legion, supporter of 4-H, served on Preston Community School board and was its president for many years. He was active in the Jackson County Cattlemen's Association and Jackson County Pork Producers for years. Loyd will be dearly missed by his wife, Barbara of 67 years. Those left to honor his memory include his children: Pam (Larry) Padgett of The Woodlands, TX, Beverly (Dennis) Eads, Eldridge, IA, Susan Downey Arvada,CO, Michael Downey, Hampton, IL. He loved and enjoyed his eight grandchildren and 5 great-grandchildren. Loyd is survived by his sister, Marian Fuller of Omaha, NE. Loyd was preceded in death by his parents and three brothers: Lyle (Loyd’s twin brother), Robert and Ronald. Memorials may be given to the Preston United Methodist Church or Jackson County 4-H.

Loyd Downey, 87, of Preston, Iowa, passed away January 1, 2021 at Mercy One Hospital in Clinton, Iowa. A private service will be held at Law Jones Funeral Home, Preston. Burial will be held at Preston Cemetery. Loyd was born on October 12,... View Obituary & Service Information

The family of Loyd Downey created this Life Tributes page to make it easy to share your memories.

Send flowers to the Downey family.