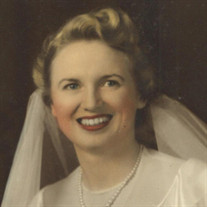 Louise Horst, age 97, formerly of Miles, IA, passed away Thursday, October 29, 2020 at Big Meadows Nursing Home, in Savanna, IL. A funeral service will be held Friday, November 6, 2020, at 2pm at Law Jones Funeral Home in Preston, IA. Visitation will take place from 12pm to 2pm. Burial will follow at Miles Cemetery. Family and friends are invited to share in Louise’s life at lawjonesfuneralhome.com. Louise was born April 23, 1923, in Belvedere, IL, the daughter of Emil Molin and Louella Woodcock. She attended Stillman Valley School, graduating with the class of 1941. During high school she was the lead singer all four years. She then went on to graduate from Northern Illinois University with a bachelor’s degree in Music, and a minor in English. On June 24, 1951 Louise married Harold Horst. Louise loved music and made a career of teaching it to others. She served as band director for Buda, IL schools, then as music director for Chadwick, IL, Miles, IA, Morrison, IL, and Preston, IA schools. She also remained diligently committed to working on the family farm. There she did everything from bringing lunch to Harold, in the field, to driving the tractor during the harvest. Always vibrant, and full of life, Louise was active in many endeavors throughout her life. She was a member of the Treble Clef Girls Glee music club, and Kappa Delta Phi honorary music sorority during her college years, and later, a member of both the Farm Bureau and Jackson County Teachers Association. She was an organist at the Miles Presbyterian Church and later the St. Mark’s Episcopal church, Maquoketa. A gifted musician, Louise could play any instrument. She had an excellent ear for pitch and easily played many songs from memory. Even in later years, Louise was eager to learn and expand her horizons. In her 90’s she enrolled in a writing course at the University of Iowa, and even started studying French in her spare time, simply because she was intrigued by the language and the French roots of English words. When she wasn’t molding young musical minds, or pouring herself into the farm, Louise loved to make memories. She placed great importance in the stories one would accrue throughout one’s life. She chronicled her own stories and encouraged those around her to do the same. She found great joy in the natural beauty of the farm, and loved travel, and expanding her view of the world. She and Harold took many weekend family trips, stopping for picnics along the way. As her son, and later her grandchildren, began to explore the world and make their own experiences, she reveled in their stories like they were her own. Louise will be dearly missed by her son, Alan (Marilee) Horst, of Miles, IA; three grandchildren, Brad (Lisa) Ries, Jennifer (Eric) Ryan, and Jonathan (Mijin) Lucke; 13 great-grandchildren, Shane, Stephanie, Hunter, Danielle, Abbie, Christopher, Jordan, Alex, Auston, Ashlyn, Alyssa, Hera, and Liv; eight great-great-grandchildren, Gabby, Brooklyn, Amora, Niya, Jack, Gabriel, Myla, and Ryleigh; as well as numerous nieces and nephews. Louise is preceded in death by her parents; husband, Harold; brother, Arthur Molin; and sister, Blanche Spofford.

The family of Louise Horst created this Life Tributes page to make it easy to share your memories.

Send flowers to the Horst family.