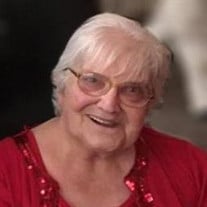 LouAnn G. Daniels, age 72, formerly of Green Island, IA, passed away Thursday May 14, 2020, at Eagle Point Nursing Home in Clinton, IA. A funeral service will be held at 10:30am, Wednesday May 20, 2020 at Law Jones Funeral Home, in Preston, IA. Visitation will take place from 4pm to 7pm, Tuesday May 19, 2020, and again for one hour prior to the service. Burial will occur at Reeseville Cemetery. LouAnn’s family wishes to convey that they will be fully understanding if you choose not to attend due to any discomfort, in light of the current events. If you do choose to attend the visitation and/or the service, we humbly ask you to practice social distancing when possible, and masks are encouraged. There will be a Facebook Live Video of Wednesday’s service for anyone who will not be present. LouAnn was born August 15, 1947, in Clinton, IA, the daughter of Harry and Mina (Landon) Boock. She attended Preston schools. On January 18, 1964, LouAnn married Arlo Daniels. The two celebrated 44 years of marriage before his passing in 2008. She found a good man, in Arlo, and he treated her as his queen. After Arlo’s passing, he and LouAnn’s children found out just how much he had spoiled her. It took all of them to fill the shoes left by their father. LouAnn was a lucky woman to have so many family members who went to such great lengths to care for her. But it was far from a one-sided relationship. She was a loving woman who cherished her family, and especially loved her grandkids. She had a giving personality, often offering people rides, even when it was clearly out of her way, and every year around Christmas, she would choose a name from the “giving tree” to buy gifts for children. Even in her later years, LouAnn made sure to keep tabs on those she loved. She always had a blast attending her grandchildren’s events, playing bingo, and of course, trying new foods. She loved food! It was commonplace for her to end phone calls with her family by asking what was for dinner, and then suggesting that they could bring her some, if they so desired. She also had a special fondness for cardinals…the bird, not the baseball team! The Cubs, Bears, and Hawkeyes were on the receiving end of her cheers. LouAnn will be dearly missed by two daughters, Lynette (David) Graham and Ami (Mark) Cramer, both of Clinton, IA; three sons, Jeff (Marsheen) Daniels, Tim (Libe) Daniels, and Lonnie Daniels, all of Clinton, IA; 13 grandchildren, Rachel (Ryan) Murphy, Chris (Kayla) Daniels, Karen (Ryan Dornbos) Daniels, Mike (Jordan Fedderson) Balous, Andrew (Amanda) Cramer, Bradley (Jordan Goldbeck) Drury, Paige (Tyler) Kitzman, Maddison Daniels, Britta (Erik) McCutcheon, Tristen (Kelsea Camp) Daniels, Christie DeYoung, Callie DeYoung, and her honorary granddaughter, Summer Jacobs; nine great-grandchildren, Bastien, Ava, Brynn, Adalynn, Gabriel, Alex, Arya, Grant, Adam; two brothers, Larry (Debbie) Boock of North Carolina, and Jerry (Sharon) Boock, of California; sisters-in-law, Pat Boock, of Waukegan, IL and Ruth Boock, of Fulton, IL; as well as many extended family members and friends, and of course, her dog, Rufus. LouAnn is preceded in death by her parents, Harry and Mina; husband, Arlo; and brothers, Leon Boock and Loren Boock.

LouAnn G. Daniels, age 72, formerly of Green Island, IA, passed away Thursday May 14, 2020, at Eagle Point Nursing Home in Clinton, IA. A funeral service will be held at 10:30am, Wednesday May 20, 2020 at Law Jones Funeral Home, in Preston,... View Obituary & Service Information

The family of LouAnn G. Daniels created this Life Tributes page to make it easy to share your memories.

Send flowers to the Daniels family.