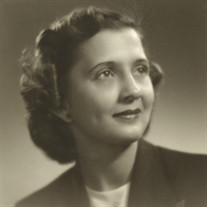 Lorraine E. Radke, age 97, of Savanna, IL, passed away Monday, January 10, 2022, at Allure Nursing Home, in Mt. Carroll, IL. Private burial will take place at Savanna Township Cemetery. Family and friends are invited to share in Lorraine’s life at lawjonesfuneralhome.com. Lorraine was born July 16, 1924, in Clinton, IA, the daughter of Harry and Mina (Bahnson) Radke. She attended Avenue Grade School in Savanna, and graduated from Savanna High School with the Class of 1942. She received a B.A. degree from Coe College in 1945 and a M.A. degree from the University of Wisconsin. Her career of teaching Spanish began at North Park College in Chicago. In 1952 she moved to Wisconsin where she taught at White Fish Bay. She also taught part time at the University of Wisconsin and the Milwaukee Area Technical College for several summers. Lorraine taught all four levels of Spanish in high school, and was a recipient of numerous awards for her contributions to foreign language education. She also held many offices dedicated to education. These positions included but are not limited to President of the WI Chapter Assoc. of Foreign Language, President of WI Chapter of Spanish and Portuguese National Assoc., Chairman of Midwest Conference Spanish Language, in Chicago, and chairman for the Foreign Language Dept. of the Midwest High School Association. But perhaps the greatest example of her excellence in her field, are the countless letters she received from past students, even decades after she taught them. Retiring from teaching in 1987, Lorraine remained active, even into her final months. She could even be spotted riding her bicycle to the grocery store well into her 90’s, and always maintained a beautiful garden at her home in Milwaukee. She was an avid fan of the Packers and Brewers and loved attending local museums, zoos, botanical gardens, cultural events, and social events ranging from ushering at the Pabst Theater, to evenings playing cards. Often-times she was accompanied by her sister which made these evenings even better. She and her sister shared a special bond strengthened through their many travels throughout the years. Lorraine loved to travel the world, including trips to China, Spain, Hawaii, and over 33 class trips to Mexico. Lorraine is survived by her nephew, Dale Brown; great nephew Frank (Lauree) Brown; great niece, Mandy (Donavon) Dewitt; great-great nephews, Cobretti and Christian Castro; and great-great niece Carmendee Castro, all of Savanna, IL. She is preceded in death by her parents, Harry and Mina; two sisters, Marilyn Radke and Jeanice (Vernon) Brown; and niece, Diane Brown.

The family of Lorraine E. Radke created this Life Tributes page to make it easy to share your memories.

Send flowers to the Radke family.