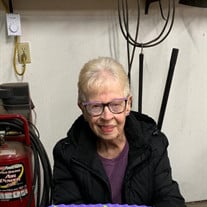 Lorel "Lori" LaShelle, of Thomson, IL, passed away Sunday, February 27th, at University of Iowa Hospital. Funeral service will be held at 1:00 p.m. Friday, March 4th, at the Law Jones Funeral Home in Thomson. Visitation will be from 10:00 a.m. to 1:00 p.m. prior to the service at the funeral home. Burial will be in Lower York Cemetery. Lori was born February 19th, 1940, daughter of Stewart and Delta (Sterenberg) King. She grew up on the family farm outside of Sterling, IL, milking cows and helping with the daily chores. On February 17th, 1968, Lori married the love of her life, Everett LaShelle. Together, Lori and Everett raised three sons, and celebrated 41 years of marriage until Everett’s passing in 2009. Lori worked as a waitress for much of her life. She worked at Dusty’s, the Watermelon Cafe, Peggy’s, and Fulton Corp, just to name a few. In her spare time Lori liked going to different restaurants and chatting with the gals. Lori liked people, and people really liked Lori. She was never short of a friend. Lori was known for her skills when it came to baking. She was famous for her peanut brittle, and also made chocolate chip cookies, chocolate cake, jello cake, and many more sweet treats. At the center of Lori’s life was her family. She took great pride in her children and grandchildren. She made sure her family knew how much they meant to her with a hug and an “I love you.” She was the best mom and grandma a person could ask for. Lori will be dearly missed by her three sons, Everett Jr (Jenny Zink) LaShelle of Thomson, James (Kristi) LaShelle of Clinton, and Joe (Brenda) LaShelle of Thomson; nephew, Kenyon Whipple; nieces, Karla Whipple, and Debbie Buckley; 10 grandchildren, and nine great-grandchildren; two sister-in-laws; one brother-in-law; and many great nieces and nephews. Lori is preceded in death by her parents, Stewart and Delta; two sisters, Louise King and Barb King; sister-in-law, Mary Lou; and brother-in-law, Jerry.

Lorel "Lori" LaShelle, of Thomson, IL, passed away Sunday, February 27th, at University of Iowa Hospital. Funeral service will be held at 1:00 p.m. Friday, March 4th, at the Law Jones Funeral Home in Thomson. Visitation will be from 10:00 a.m.... View Obituary & Service Information

The family of Lorel "Lori" LaShelle created this Life Tributes page to make it easy to share your memories.

Send flowers to the LaShelle family.