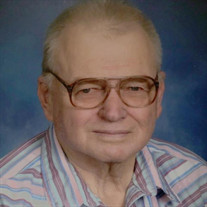 Loras Lee Kilburg, age 82, passed away Monday, May 17th, at Maquoketa Care Center. Funeral Service will be held at 2:00 p.m. Friday, May 21st, at St Joseph’s Catholic Church in Preston, IA. Visitation will be held from 12:00 p.m. to 2:00 p.m. prior to the service at the church. Loras was born September 17th, 1938, in Clinton, IA, son of Leo and Leona (Reistroffer) Kilburg. He grew up on the family farm outside of Miles, IA. Loras attended Preston High School and graduated with the class of 1956. After graduating Loras joined the United States Army, Iowa National Guard Artillery and was active for five years. Loras then returned to Jackson County to farm. In the early 80s Loras met the love of his life, Leanna Schmidt. The couple married on December 10th 1982. Together Loras and Leanna celebrated 18 years of marriage, until Leanna’s passing in 2000. Loras was an avid gun collector. He was a member of the local gun club and competed in many shooting tournaments where he would often place in the top tier of competitors. Loras also loved to hunt. He would travel to Montana multiple times to hunt bigger game that can’t be found here in Jackson County. Loras was also very active in the Hunter Safety Classes held in Preston. Loras was an active member of his community. He was a member of the Preston Lions Club as well as the Knights of Columbus, Amvets Post 140 and Pheasants Forever. He enjoyed a good card game and was a recreational gambler. Most Every morning you could find Loras at the local restaurant in Spragueville, Marlee and Me, to enjoy a home cooked breakfast, coffee, and great conversation with his friends. Loras was a quiet man, with a humble and gracious heart. He was a giver. He gave to many charities and to anyone in need. Loras was devoted to everything he did. He was especially devoted to his family and his church. His calm and loving nature will live on in those he loved most. Loras is survived by four stepchildren, Kathy (Greg) Kilburg of La Motte, IA, Dan (Jan Rizzuto) Schmidt of Lake in the Hills, IL, Jody (Tim Budde) Yaddof, of Preston, and Randy (Patty) Schmidt of Miles; nine grandchildren and two great-grandchildren. Loras is preceded in death by his loving wife, Leanna; parents, Leo and Leona; his granddaughter, Desiree Lundin, and his son-in-law Keith Lundin.

The family of Loras Lee Kilburg created this Life Tributes page to make it easy to share your memories.

Send flowers to the Kilburg family.