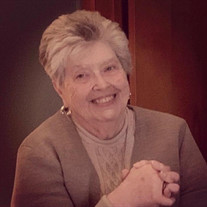 Linda Lee Sippel, age 72, of Thomson, Illinois passed away Wednesday, October 7, 2020 at the University Of Iowa Hospitals after succumbing to the disease ALS. A private family Celebration of Life will be held with burial in the Lower York Cemetery, Thomson. In lieu of flowers, the family is establishing a memorial fund for Linda. Law Jones Funeral Home is in charge of arrangements and you may share in Linda's life at lawjonesfuneralhome.com. Linda was born March 27, 1948 in Clinton, Iowa, the daughter of Lloyd "Red" and Geraldine "Gerry" (Putnam) Johnson. She was raised by grandparents John and Florence Johnson in a farming family and fondly remembered helping to do chores with Grandpa Johnson. Linda attended York Community School in Thomson and excelled at cooking in 4-H. She attended Prom with her future husband, Stephen Sippel, and both graduated in 1966. Steve served in the Army in Vietnam, returning from his first tour of duty to Fort Bliss, Texas. While on leave at home, Linda and Steve were married November 17, 1968. At that moment she became an Army wife moving with Steve to Texas, and later down the road, when Steve reenlisted, she became a Navy wife. They traveled and lived in many places while raising two children, her favorite place to live was when Steve accepted an assignment at Camp David. Although she was shy growing up, Linda learned to be strong and resourceful, taking the lead as president of the USS America Enlisted Wives Club and a member of the Ombudsman Group. She made several close friends with other military wives during this time. After Steve's service, they returned to Thomson to finish raising their two children, Ronald and Sara. Linda was a loving wife, mother, grandma and great-grandma. She liked to crochet and made several afghans for her family. The grandchildren (and Steve) always looked forward to having her homemade cake and cookies. Her kids appreciated how she was there for them no matter what. Linda was also a hard worker and held several jobs, including working at Casey’s in Thomson, Shell Station in Fulton, IGOR where she traveled in Northern Western Illinois to maintain Lotto machines, and as the head cashier at Home Depot in Clinton. When she thought she might retire, she found a better option working with her sister, Roxanne, at the Chadwick School kitchen. Linda enjoyed anything that involved her grandchildren, including traveling to Sami's cheer competitions and grandson's ball games. She also had two close companions, her dogs, Zoey and Mandy. Linda will be dearly missed by her husband, Steve Sippel of Thomson; her son, Ronald "Ron" (Erica) Sippel of Clinton; her daughter, Sara and fiance Zach Dickau; eleven grandchildren, Trista (Josh) Myer, Tyler Taliaferro, Tristen Sippel, Travis Sippel, Talen Sippel, Toby Sippel, Samantha Sippel, Caleb (Cheyenne) King, Keegan Dickau, Noah Rannow, and McKenna "Ten" Dickau; a great-grandson, Dean Myer; two sisters, Mary (Richard) Smith of Shannon and Roxanne Kness of Clinton; and a sister-in-law, Ann Johnson of Thomson. Linda is preceded in death by her parents; her grandparents, a brother, John Johnson; a sister, Connie Lease; a brother-in-law, David Kness; a nephew, Jacob Kness; and a sister at birth, Judy Johnson.

Linda Lee Sippel, age 72, of Thomson, Illinois passed away Wednesday, October 7, 2020 at the University Of Iowa Hospitals after succumbing to the disease ALS. A private family Celebration of Life will be held with burial in the Lower York Cemetery,... View Obituary & Service Information

The family of Linda Lee Sippel created this Life Tributes page to make it easy to share your memories.

Send flowers to the Sippel family.