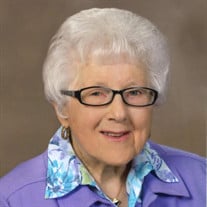 Letitia “Letty” Weidman, age 97, longtime resident of Savanna, Illinois, passed away peacefully Sunday, October 24, 2021 at home, with her husband and daughter by her side. Letty was born May 10, 1924, the daughter of Harry and Ella (Weggan) Stanelle in Forest Junction, Wisconsin. She attended high school in Brillion, Wisconsin, graduating with the Class of 1942. She later attended North Central College in Naperville, Illinois earning her degree in Education. She accepted a teaching position in Savanna. While attending a card-party at a friend’s home, Letty met the love of her life, Bill. On April 11, 1952, Letitia married William “Bill” Weidman in Neponsit, Illinois. Together they raised two children and celebrated 69 years of marriage. Letty taught at all three Savanna Elementary Schools until her retirement in 1981. She continued to work as a substitute teacher for many years after retirement. Letty loved the little ones and her students knew her as a hugger. Her church was very important to her. She enjoyed camping, taking family vacations— especially to Glacier National Park, and watching the Packers play football. Letty and Bill were members of the Savanna United Methodist Church. Her church, faith and following her beliefs were very important to her life. Just like with her students, Letty always expected, and saw the best in others. Letty will be dearly missed by her husband, Bill; two children, Becky (Dan Pitman) Weidman of Savanna and David Weidman of Stockholm, Sweden; four grandchildren, Shauna, Aidan, Linman, and Loyalton; and five great-grandchildren. She is preceded in death by her parents, 12 siblings, a sister-in-law, and her father- and mother-in-law. A private family service will be held with burial of ashes to take place in Savanna Township Cemetery at a future date. Memorials may be given in Letty’s honor to the First United Methodist Church scholarship fund in Savanna, or MercyOne Hospice in Clinton.

The family of Letitia "Letty" Weidman created this Life Tributes page to make it easy to share your memories.

Send flowers to the Weidman family.