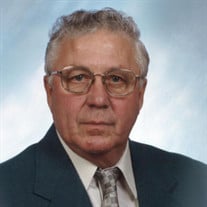 Leonard Bormann, age 78, of Preston, IA, passed away at his home Sunday, March 1st, 2020. A funeral mass will be held at 11:00 am Friday, March 6th, at St Joseph Catholic Church in Preston. Visitation will be held 4:00 pm to 7:00 pm, on Thursday, March 5th at the church. Concluding the visitation, a rosary service will be offered by the Knights of Columbus of Preston, Bellevue, and Maquoketa, everyone is invited to participate. There will also be a visitation at 10:00 am prior to the funeral service. Leonard was born on June 5th, 1941, son of Richard Sr and Regina (Feller) Bormann. He grew up on the family farm, fishing and hunting with his seven brothers and sisters. He attended country school. Leonard spent six years in Iowa National Guard. It was during this time he married the love of his life Connie Badrick on October 10th, 1961 at St Joseph Catholic Church in Preston. They celebrated 58 years of marriage. Leonard was known around town as “Getty”. He owned and operated his full-service station for over 40 years. Leonard was committed to his livelihood but his secret to success was his Catholic Faith, his undying love for his wife, family, friends and his commitment to excellence. He also had an affinity for clean, well-kept vehicles. Leonard was a staple in the community. He was a member of the Preston Volunteer Fire Department, a charter member of the Preston Lions Club, and a member of the Knights of Columbus. He was an avid bowler and participated in many leagues throughout his life. As a member of the “5 O’clock Club” Leonard would often socialize with friends after work at the Downtown Tap. Most important to Leonard was being a husband, father, and grandfather. He loved his family and instilled into his children and grandchildren the many traits that made him a great man. His kindness, intelligence, and especially his sense of humor will not soon be forgotten. Leonard’s family would like to thank the doctors and staff of MercyOne Medical Center, Dubuque, Medical Associates Clinics of Bellevue and Dubuque for their exceptional care and expertise, especially Dr. Jeffrey Hunter, Dr. Eric Engelman and their staffs during Leonard’s journey and fight with cancer. Leonard will be dearly missed by his wife, Connie of Preston; three sons, Mike (Jamie) of Preston, Doug (Vicky Foley) of Moline, IL, Christine Mefford, daughter-in-law, Ottumwa, and Scott (Monica) of Preston; eight grandchildren, three great-grandchildren; one brother, Verlyn (Jane) Bormann of Preston; and two sisters, Bev Cook of Preston, and Shirley (Steve) Ritenour of Preston. Leonard is Preceded in death by a son, Thomas Leo, his parents, Richard Sr and Regina; three brothers, Kenneth, Duane, and Richard Jr; his sister Patricia Reedy, and two grandsons, Tyler and Jacob.

The family of Leonard Bormann created this Life Tributes page to make it easy to share your memories.

Leonard Bormann, age 78, of Preston, IA, passed away at his home...